New to ‘Fustany Talks’? This is our latest series of articles where we have real conversations about topics that people are yet to open up about and discuss freely. Each of the Fustany Team members discusses it from their own personal experiences. Follow our #FustanyTalks for the latest content and join the conversation. You can also suggest our next topic here.

Imagine this, millions of people around the world, each in the safety and comfort of their homes logging on to different social media portals to speak a piece of their mind. They scroll their feeds, see what others are posting and comment whatever crosses their minds with a touch of a button. They don't care how they phrase their words, it doesn't cross their minds how anyone would understand these lines and react to them because they're just 'expressing themselves' from their own eyes with no regard to anyone or anything else. The result is always disastrous! Countless negative comments are spread out under every single post you might come across on Instagram, Facebook, Twitter and even YouTube.

For a very long time I stayed clear of social media as a whole, to rid myself of all this negativity that crosses my feed on the daily. It drains me out and sucks any energy I have left after all the usual roller coasters of emotion and daily stress. That was a few years ago, but last year I got back to being active online but only through Twitter. I block any negative accounts and follow the ones that update me on the world news and things that interest me, being very picky about the accounts I follow to avoid that same energy draining cycle again. That is until I came across this tweet from The Late Late Show with James Corden: 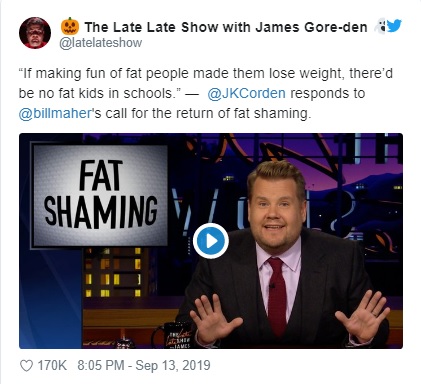 I watched the video and I was stunned and outraged! In the video, James Corden responds to Bill Maher who was arguing that "fat shaming doesn't need to end, it needs to make a comeback" he added that being overweight is not a birth defect and that "no one comes out of the womb needing to buy two seats on an airplane" and that some amount of shame is healthy.

In a time where people are readily criticizing everything that they don't agree with, even bullying someone for saying something or posting a picture that doesn't match their taste, do we really need to encourage them to do it even more? How is it okay to normalize bullying and body shaming? Everyone and their mothers are already struggling with body image and self acceptance, because of the 'too perfect' image that the media and magazines throw in our faces all the time. James Corden's response to Bill Maher was so on point and if I can respect that man even more I would. He talked from his own experience that losing weight is not that simple as Maher made it look like, and that there are many factors that contribute directly to it such as poverty, gene defects and even bullying which sparks unhealthy behavior such as over eating. He was spot on pointing out that shaming is just another name for bullying.

I understand what Bill Maher was trying to do by shedding light on a health problem that society is suffering from, but it was how he did it that was so off track in too many ways.

This brings me back to what I was trying to say before. Seeing a problem or a post that you don't like and highlighting it or criticizing is not the issue, it's the way we do it that can create a disaster. We really need to differentiate between disagreement, constructive criticism and bullying. Because the way I see it, we mix them all together and think they are the same, when in fact it's almost always just plain bullying.

It's not cool or edgy to speak harshly to others on social media because your words have weight and impact on those receiving them. This is not what it means to express yourself or state your opinion. These harsh words are not just floating around in a blank space called the internet. There are real humans behind these screens and they get hurt just as much as we all do. They create scars so deep into us that if you hit that 'post' button on a really bad day, that person on the other side of your comment, might just be forced off the edge they were hanging on to with what little strength they had left.

A few days ago, Sulli, a South Korean singer and actress took her own life after being bullied continuously online for years. She was very talented, young and she did not deserve to be treated with so much negativity. This news came as a huge shock to me because I used to listen to her songs when I was still in university and she always had a cheerful presence and a happy smile on her face. Only that wasn't enough for the general public, attacking her behind their screens because she didn't dress the way they wanted her to or didn't act according to their own tendencies.

This tragedy was all over the news because she was a very well known figure, but do you ever ask yourself before attacking others, who are just regular humans like you and I, how much would they be affected by these virtual bullets you're shooting them with? Do you ever re-read your comment before you send it out into the world to make sure it's stating an opinion, not of an attack?

Maybe, when I see a post that I don't agree with I can just ignore it? Maybe, if I want to join the online conversation, I can try to pick kinder words? Maybe, if before I get too enthusiastic to disagree with someone online, I can try to put myself in their shoes and say, "I don't really know where you're coming from, but here is my own opinion with my own experience if that fits you too..." or "I don't see this point from the same perspective as you, because this is my perspective in case you didn't see the other side of things."

Don't miss out on reading our last article from our #FustanyTalks series.

Fustany Talks: A Victoria's Secret Model Made Me Love My Stretch Marks →

Fustany Talks: I Was Not Inspired by Demi Lovato’s Truth →

25 Good Things You Can Do, Because the World Needs More Kindness! →