We're officially counting down the days until the 2022 Oscars, and we can't wait to see all of the red carpet fashion. In honor of the Oscars 2022, we decided to take a look back at the best Oscar red carpet dresses of all time. From Audrey Hepburn in a Givenchy gown at the 1954 Oscars to Lupita N'yongo in a Cinderella-like Prada gown at the 2014 Oscars, these are the most memorable Oscar gowns. Here is Oscar fashion: all-time best dresses on the Oscars red carpet

Oscars 2021: Genius Fashion Tricks You Might Have Missed From the Red Carpet

Let's start with some of our favorite Oscar looks from over the years:

Audrey Hepburn in Givenchy at the 1954 Oscars 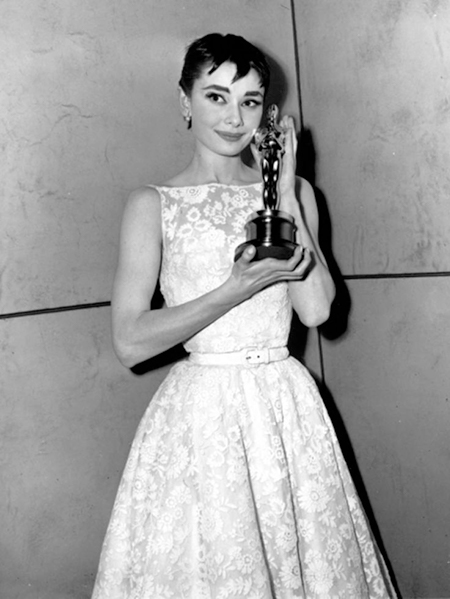 Audrey Hepburn has always been known for her impeccable fashion sense, and she frequently collaborated with Givenchy for her red carpet appearances. This Givenchy gown was, and continues to be, one of the most stunning red carpet looks.

Elizabeth Taylor in Dior at the 1960 Oscars 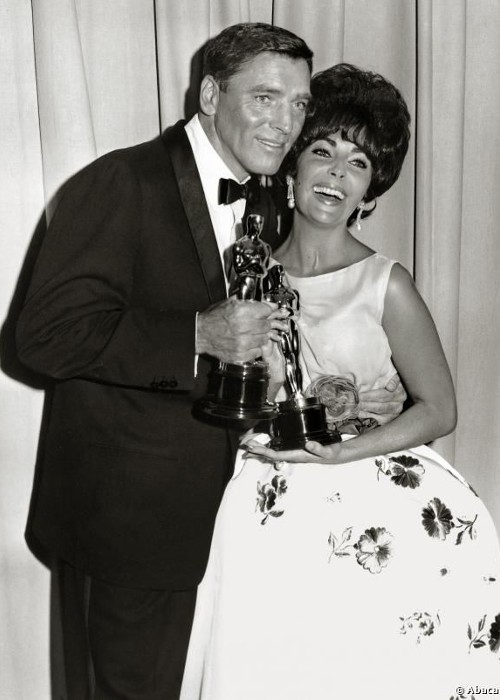 Elizbeth Taylor's white broderie gown wowed us back then, and we're still impressed by how elegant her look is with her hairstyle and keeping it simple with her accessories.

Lauren Hutton in a Halston Gown at the 1975 Oscars 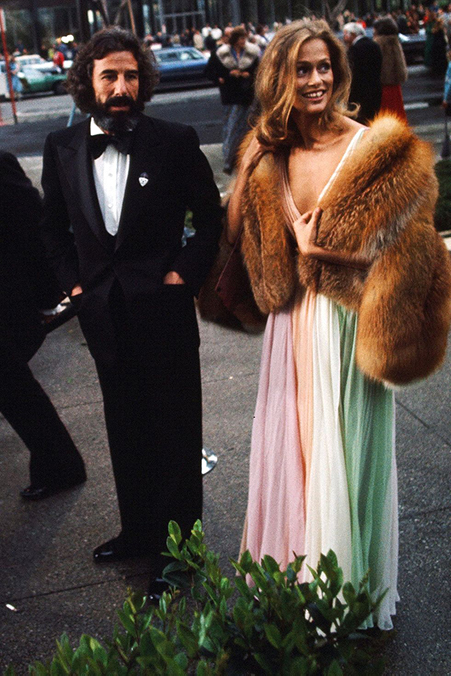 We all remember the 1970s, and nothing says "70s" like Lauren Hutton's rainbow gown and hopefully her animal-friendly fur jacket.

Daryl Hannah in a Gold Dress at the 1988 Oscars 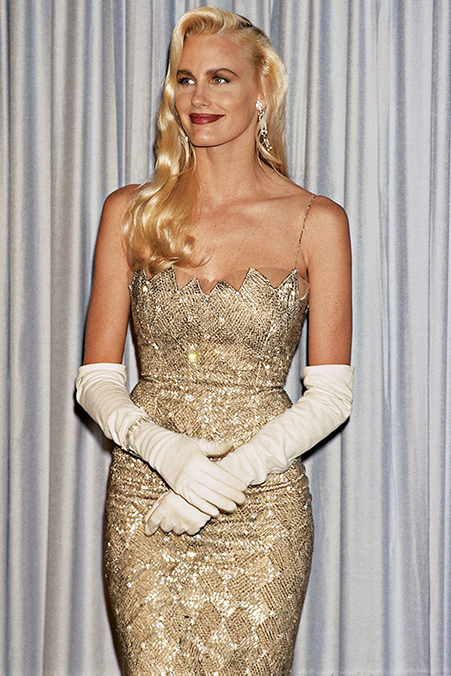 Winona Ryder in a Black Strapless Dress at the 1990 Oscars 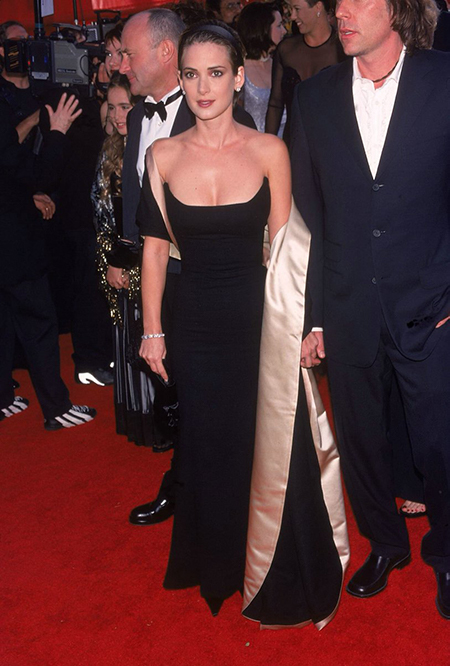 If you're looking for inspiration for a sleek, strapless black dress, consider Winona Ryder's 1990s as a dress to make, because her entire look was simple yet stunning.

Whitney Houston in a Suit at the 1994 Oscars 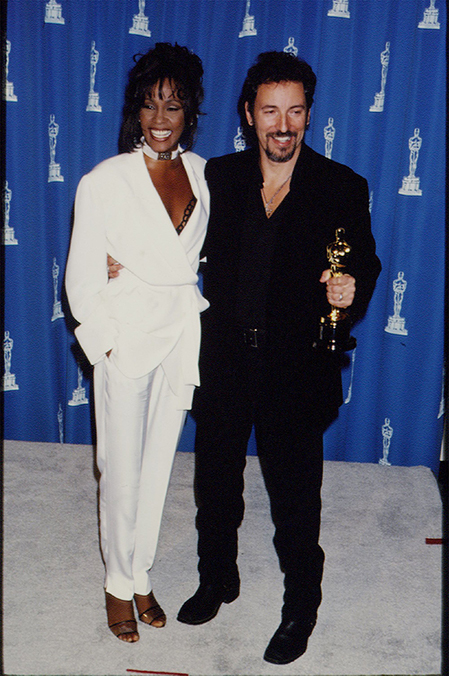 In a sexy white suit, Whitney Houston stood out in a sea of fabulous gowns. This was also the year she was an Oscar presenter. 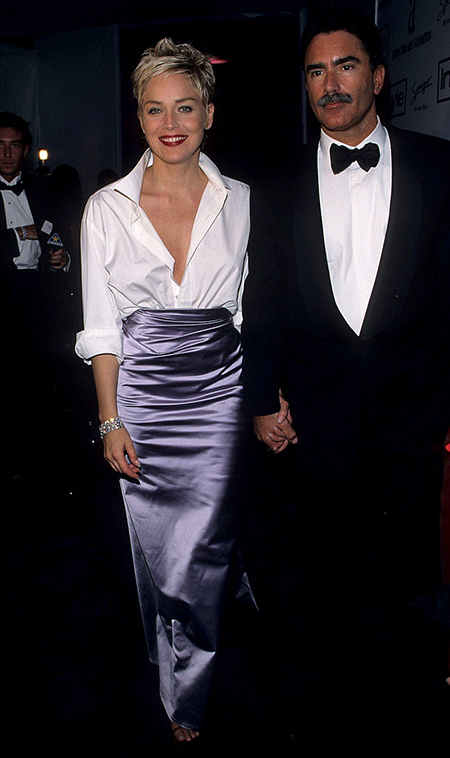 Sharon Stone, well-known to March on her own beat, wore a lavender satin Vera Wang skirt with a men's button-down shirt to the 1998 Oscars. Something new at the time, but it's still a statement look.

Julia Roberts in a Valentino Gown at the 2001 Oscars 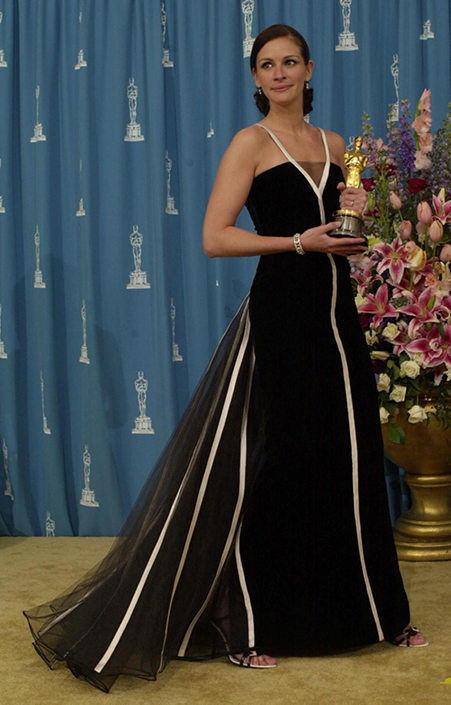 We all love Julia Roberts, and we loved her Valentino gown back then, and we still do.

Charlize Theron in a Dior Gown at the 2004 Oscars 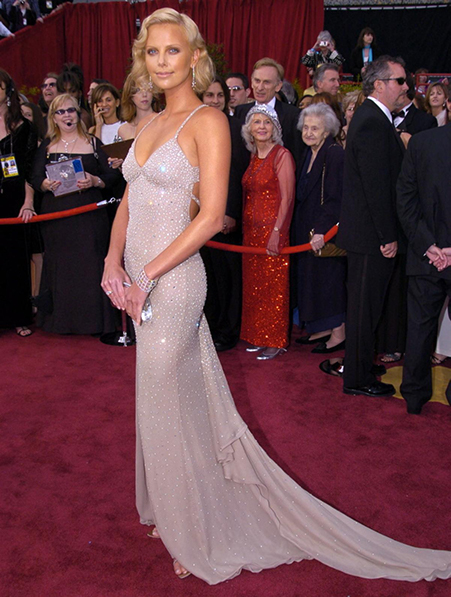 The best combination is having a nice tan and wearing a nice sparkling dress, which Charlize Theron did at the 2004 Oscars and looked very sexy!

Nicole Kidman in a Balenciaga Gown at the 2007 Oscars 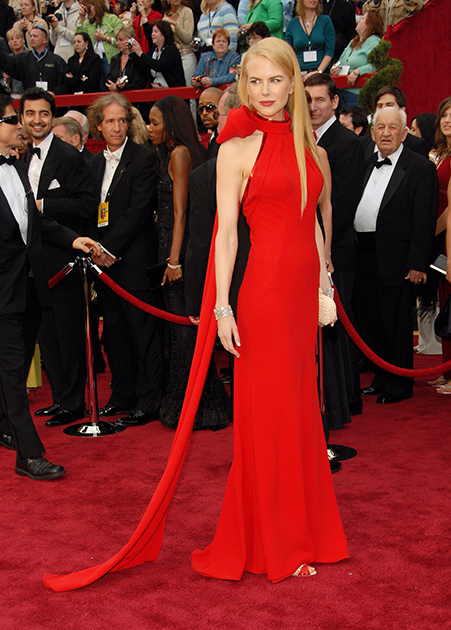 Have you heard the expression "simple from the front, party from the back"? Because of the large bow, Nicola Kidman's Balenciaga gown was exactly that.

Anne Hathaway in an Armani Privé Gown at the 2009 Oscars 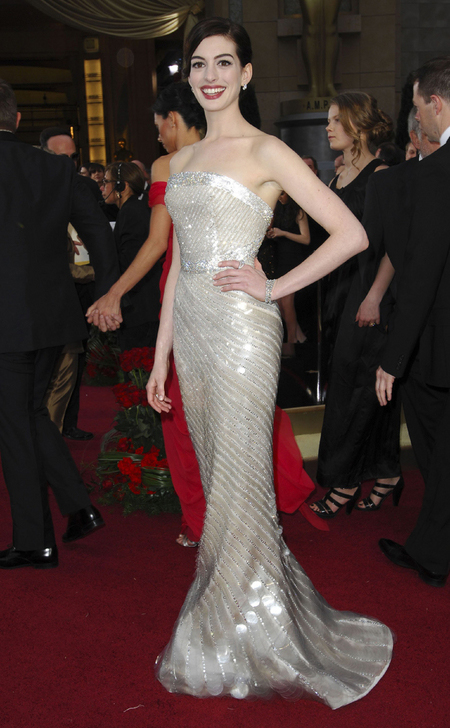 Anna Hathaway wore an opal paillette-covered Armani Privé gown; the entire look was stunning, but it's Anna Hathaway; nothing ever looks bad on her. 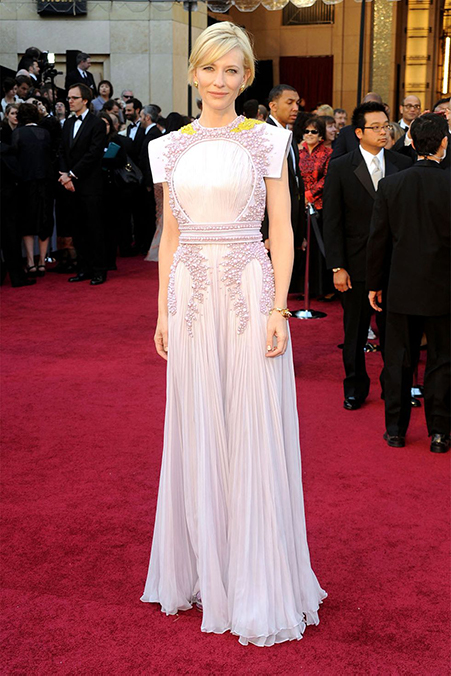 Cate Blanchett is known for taking risks on the red carpet, and she dazzled in this Givenchy Haute Couture masterpiece.

Angeline Jolie in a Versace Gown at the 2012 Oscars 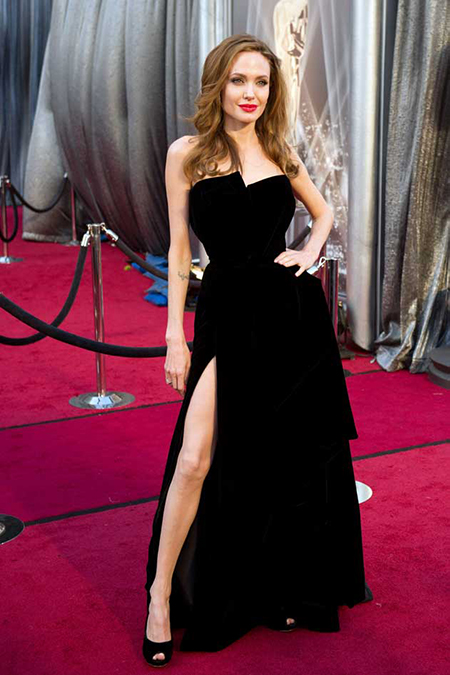 We've all heard of the infamous "Angie leg," which refers to Angelina Jolie in her Versace gown, and I guess slits became a thing after this look!

Jessica Chastain in an Armani Gown at the 2013 Oscars 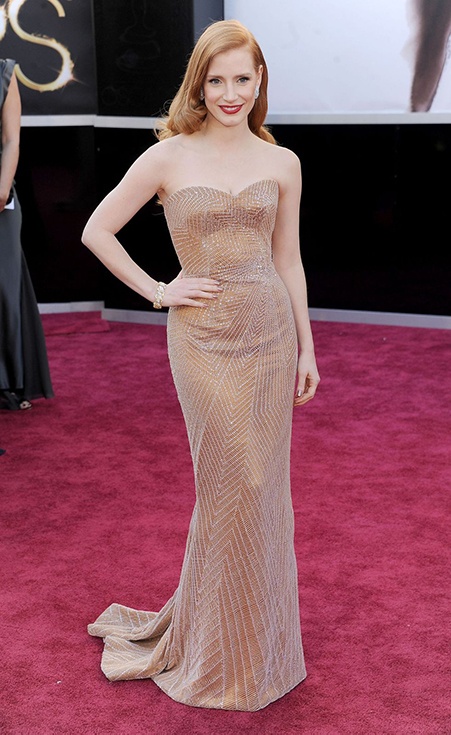 Jessica Chastain's look was inspired by Old Hollywood in this embellished Armani gown with a sweetheart neckline and her hair in soft waves, which resulted in a very sexy look.

Lupita Nyong’O in a Prada Dress at the 2014 Oscars 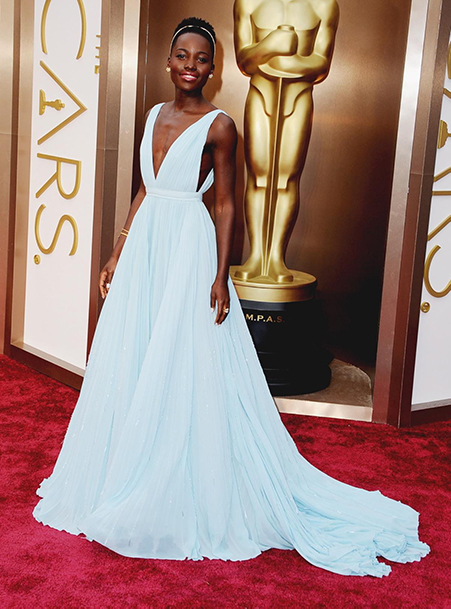 2014 was Lupita Nyong'o's year. The actress wore a custom Prada gown, and the color is called "Nairobi blue" in honor of where she grew up in Kenya. 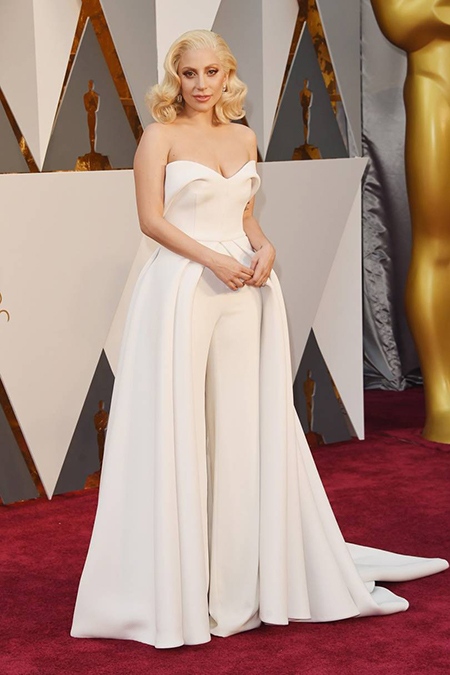 Is this a jumpsuit or an haute couture gown? Only Lady Gaga can pull off both. She looked stunning in this Brandon Maxwell-designed gown, which complemented her personality perfectly.

Laura Harrier in a Louis Vuitton Gown at the 2019 Oscars 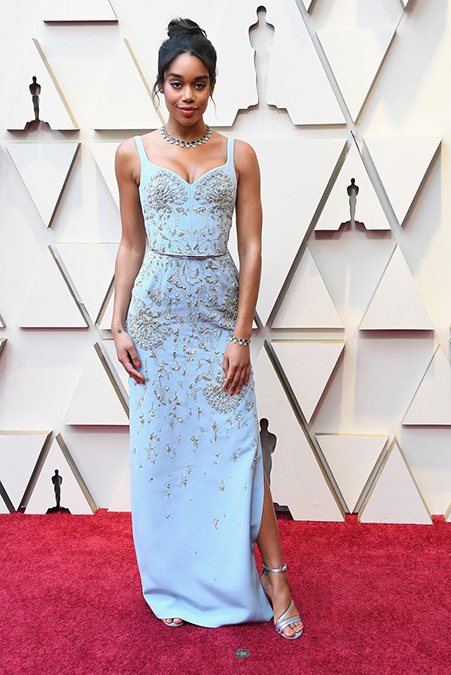 Laura Harrier walked the red carpet in an ethical and environmentally friendly Louis Vuitton gown. The silk gown was handcrafted and embroidered with glass beads, Swarovski crystal shards, and sequins. 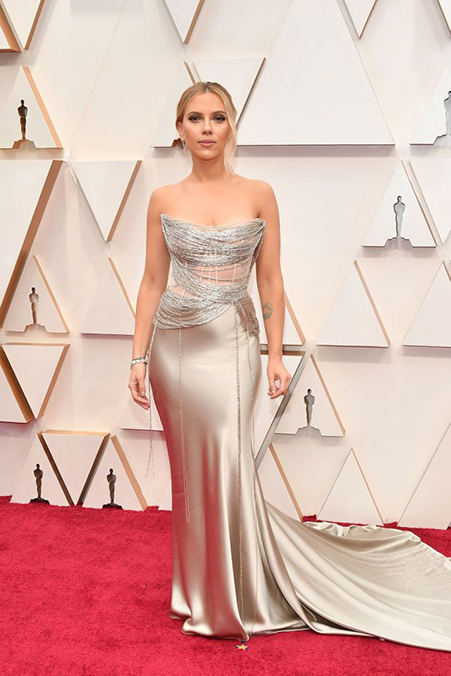 Angela Bassett in an Alberta Ferretti Gown at the 2021 Oscars 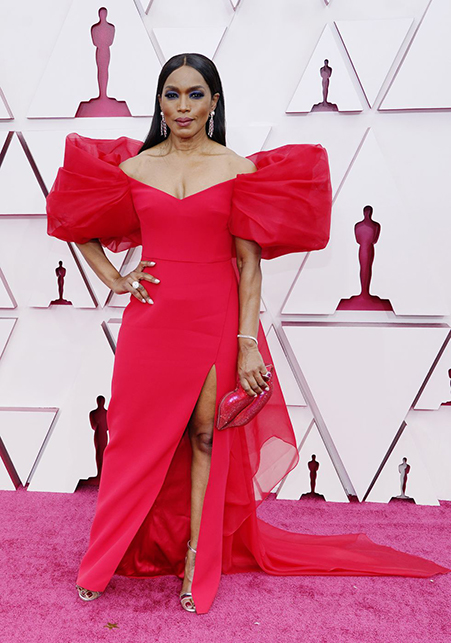 Angela Bassett looked stunning in a red Alberta Ferretti gown and dazzled us with Chopard jewelry.

Scroll down to see more Oscar looks to get you excited for this year's red carpet looks.

12 Leave-In Conditioners That Will Keep Your Curls Looking Healthy →

Pear Body Type: Which Accessories Are Best for You and How Do You Choose Them →