We usually go on a few dates at the beginning of a relationship, get to know his/hers friends, and observe how they treat others, and noting whether we are okay with a their common traits. But, let us all agree that we are all different and have different preferences. For example, you may be fine with something while your friend is not. It's a good thing you're aware of what you like and dislikes, as well as what you want from this relationship; for example, do both of you want a committed relationship, or do you want something different? I believe these things are best discussed early on rather than later on.

Some signs we can ignore, such as them not liking your favorite movie, but others we cannot, such as disrespecting you, and this is where the term "red flag" comes in. Let me introduce you to this very important term that you have most likely heard a lot. In sports, red flags are thrown to indicate a stop! The person you're seeing could be a metaphor for red flags, and you should stop because it's not safe for you.

10 Things Not to Do on a First Date

1. Doesn’t pay for your coffee.

If he's cheap, the door is right there, boy bye! We actually received a lot of responses about them being cheap, and personally I see it as a red flag. Don't get me wrong, I don't mind if the girl pays , or if you want to split the bill from time to time, but if it's something like grabbing a cup of coffee and he steps to the side for you to pay, you might want to pay attention to that.

If you're thinking, "What's the big deal about a cup of coffee?" Small things lead to bigger things, for example, if it starts with a cup of coffee, it will lead to you paying for your own dinner when you're out on a date, which I don't think you want. We're looking for a gentleman who knows how to treat his lady. So it's better to run now rather than later.

2. Know your worth and refuse to be disrespected by anyone. 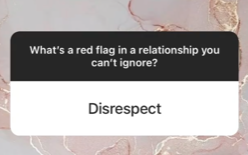 Run already, gurl! You must know your worth and must not allow anyone to disrespect you. A true gentleman will always respect his girl no matter what, if he is stressed, it is not an excuse, or if he is having a bad day it is also not an excuse, you are not a sandbag for him to vent his anger, always remember that.

This is a major red flag for me; it is not okay for anyone to disrespect you mentally or physically, even if it is your husband; he needs to give you the same respect you give him. You may be creating a healthy environment for your children, but seeing their mother being treated badly will affect them in the future. So speak up for yourself and say you're not okay with it, or simply leave.

If you're meeting someone new and wondering how things will go, both of you should be aware that you both need to put in the same effort. It's not fair for someone to put in more effort while receiving nothing in return. It is not acceptable for him to not give you the attention you require and desire. If you find yourself wondering whether he likes you or not, this is not good for your mental health. When you're with the right person who meets your needs, you'll never question his love. If he truly loves you, he will notice and try to make an effort, the point is he will show you that he cares.

A guy who prioritizes himself over you, the door is wide open for them to leave! Another major red flag is a guy who puts you second and himself first. I believe men who do this are selfish, and no one wants to be with a selfish man. Instead, we want a caring man who will notice when something is wrong and will ask about your day.

50 Questions to Ask Your Partner for a Fun Date Night

4. Once a cheater, always a cheater.

I’m with this school. Once a cheater, always a cheater. If he did it once, he will do it again and again. Do you ever wonder why guys cheat? It's because they are dissatisfied with what they have and will always look for something else, even if you do everything you can, you will never be able to satisfy them.

If you're still getting to know a guy and he starts telling you about his previous relationships and how things ended because he cheated, cut the chase and don't even get involved. It will be very unhealthy for both of you because you will find yourself not trusting him and going through his belongings for any evidence, which is not a healthy relationship.

Emotional Cheating: 3 Women Talk About What They Went Through

5. Flirting with other women in front of you.

Come on, man, what are you doing?! Respect the lady you're with. This is not acceptable under any circumstances. The first thing that comes to my mind when I see a guy doing so, is that he is unhappy with his choice and is looking for other options. This is not respecting the feelings of the girl he is with and will eventually lead to other future problems. So if your man does that, you shouldn't call him your man!

If he's a liar, he's out the door right away. How will you convince yourself to believe a liar? You'll always question him, whether he's telling the truth or not. In general, no one likes a liar, so why be in a relationship with one? This is a red flag, and if you choose to stay in this relationship, disaster awaits you in the future.

Online Dating Stories: A Hopeless Romantic on a Dating App

7. Nobody likes a potty mouth.

We can't be very judgy and say that we don't curse because that would be lying to ourselves; at some point, we get a little frustrated and curse, and that's fine with me and other women, but if a guy curses a lot for no reason, that's just not okay. You must ask yourself if you are comfortable with your children cursing like their father. If he curses frequently, I find it a turn off.

8. Speaking negatively about his ex-girlfriend. 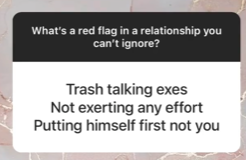 Hmmm, is this the type of guy you want to be with? Even if his exes weren't the best, he has no right to speak negatively about them. And I believe that if he talks like this about his ex, he will do the same to you at some point.

Think of it like this, he was in a relationship with this person for a while and things didn't work out between him and his ex, but that doesn't give him the right to speak negatively about her; he needs to respect her and the good times they spent together, and it's okay for things not to work out. So, if he talks negatively about his ex, you should reconsider.

What Is the Difference Between a Break and a Break up in a Relationship?

Controlling men are an absolute no-no and a major red flag. And in every relationship, we like to have our own space where we can have a little time for ourselves. But controlling men will invade your space and your life, and will not give you space to even think, which is what they like to do in order to be in control of you and your decisions. He will control what you wear and who you hang out with; to me, this is not love; this is giving up yourself to be in jail, thinking it's love, but it's not. That is not at all healthy!

10. The way he treats his mother reveals a lot about him.

How do you expect him to treat you if he treats his mother badly? He's treating the woman who carried him for 9 months and was always by his side when he was sick and did a lot for him to be the man he is now in a very rude way; is a huge red flag that you should block him. A family-oriented guy who knows how to treat his mother is the guy you want, but if he doesn't care about his family, especially his mother, don't expect him to give you the love you deserve.

Your Partner Is Not Your Hero →

The 90s Hairstyles Are Back! Here Are the Most Popular Hairstyles Right Now →