Princess Diana's Looks: The Crown vs. Real Life Side by Side

The moment we've all been waiting for is here. The Crown season 4 is finally out on Netflix and everyone's excited to see Princess Diana, the actress Emma Corrin playing her, her character and story to begin. Of course The Crown is known to create very accurate representations of real life looks and settings, so we thought we'd take a look at Princess Diana's looks in the crown vs. real life...

Princess Diana in The Crown season 4:

How to Wear and Style Colors Like Royal Queens and Princesses 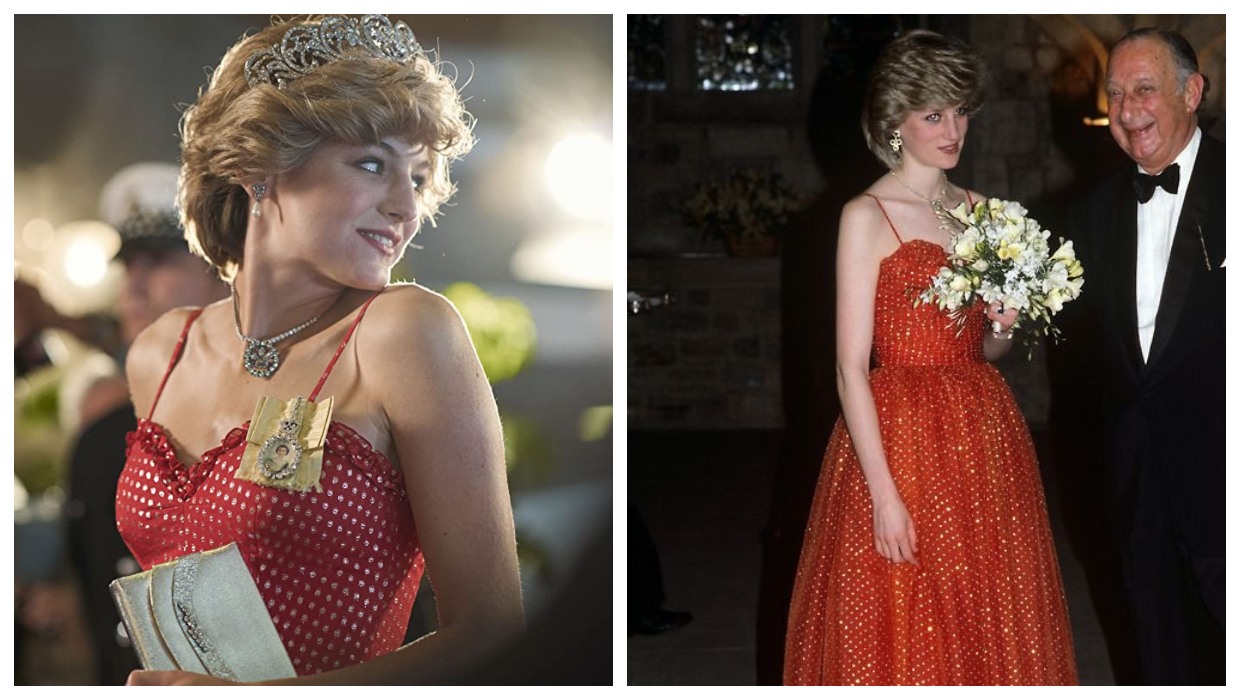 This simple red dress was almost an exact replica of the original. A stunning red on Diana with gold dotted detailing. A classic and timeless piece. 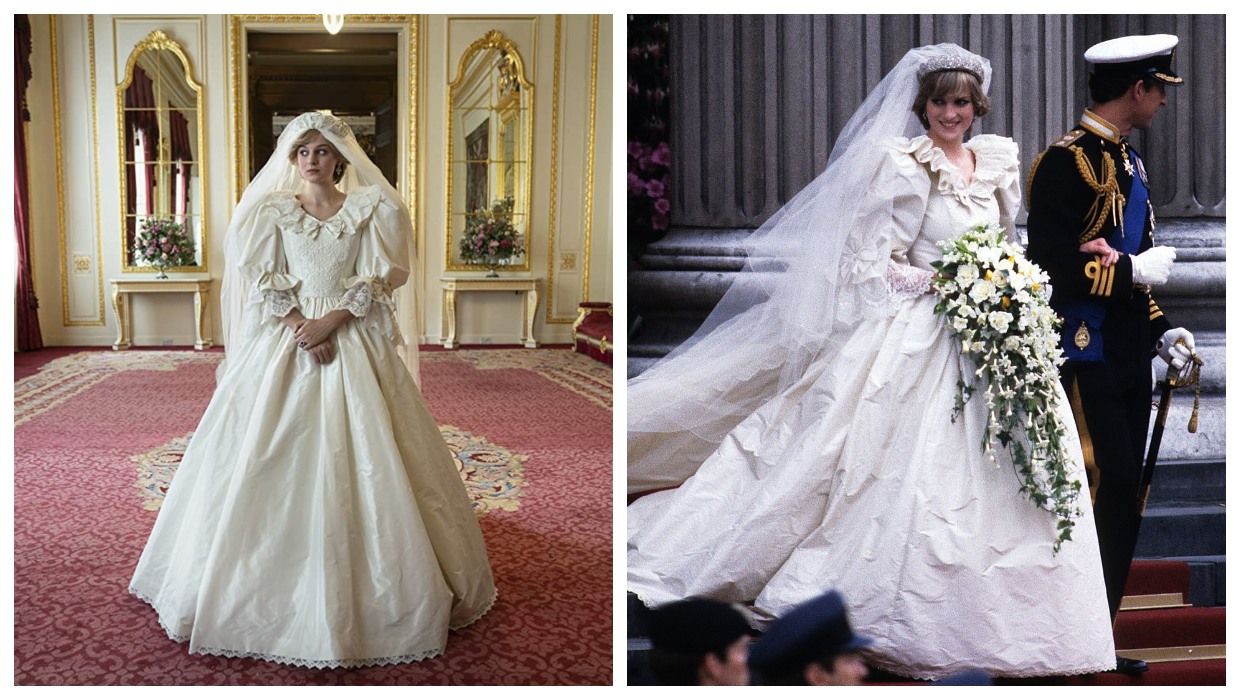 One of the most iconic royal wedding dresses of all time was recreated for the show. The original design for Diana was by Elizabeth and David Emanuel. David actually collaborated with the costume designer on the show, Amy Roberts. 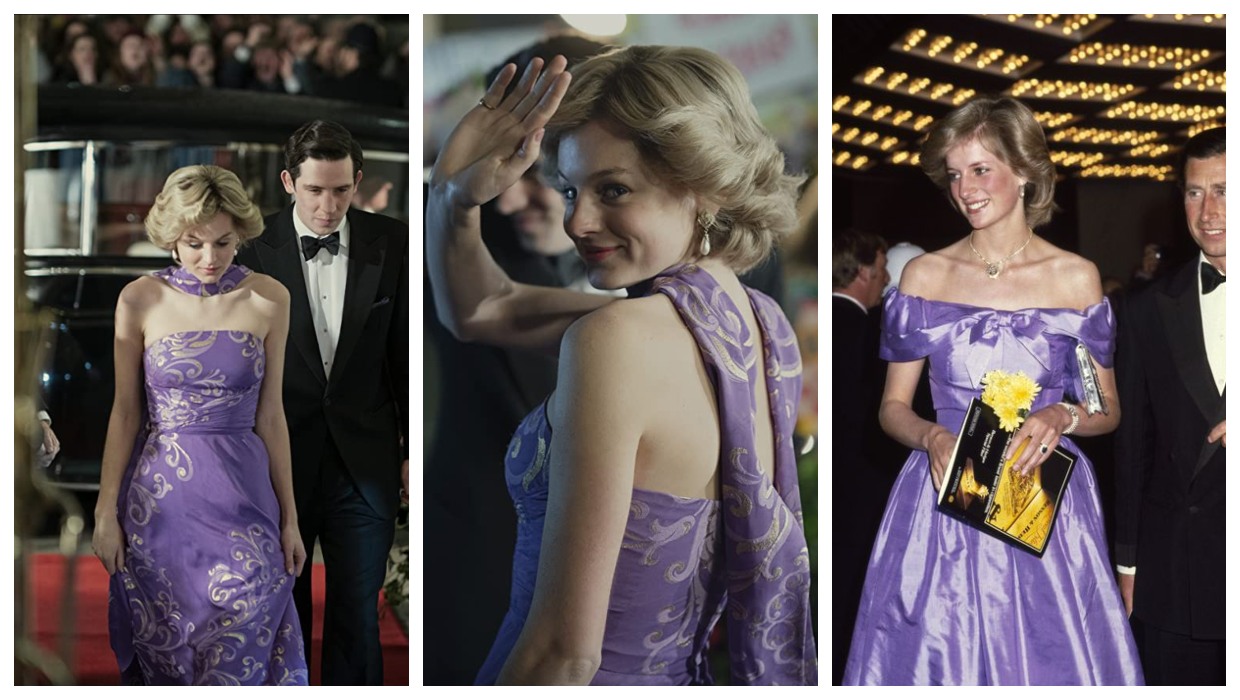 We think this purple dress took inspiration from one for evening dresses that was in the same shade of purple but with slightly different details. Side by side we can see how the idea came to be, along with some other of her evening dresses, including a blue dress that she once wore with the same shawl idea. 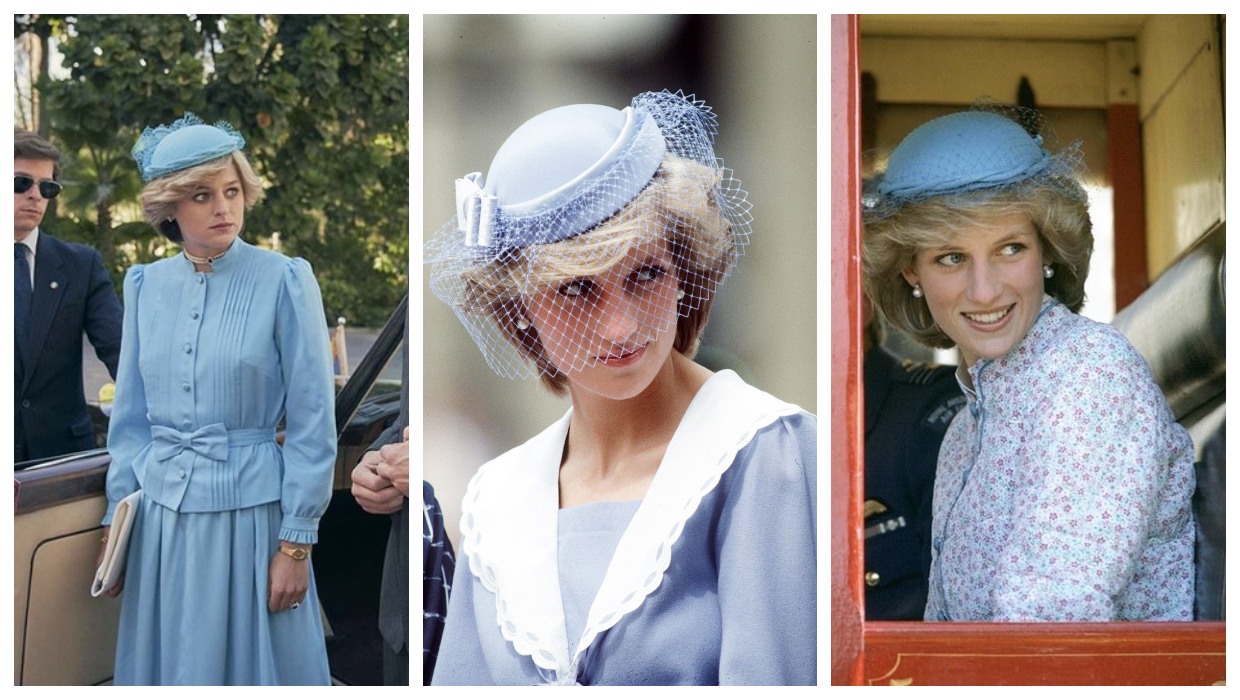 The traditional royal hats were seen on Diana and in beautiful shades like these blue ones. The crown replicated one of them pretty accurately and paired it was blue skirt and blouse combo that references a lot of her 80s looks. 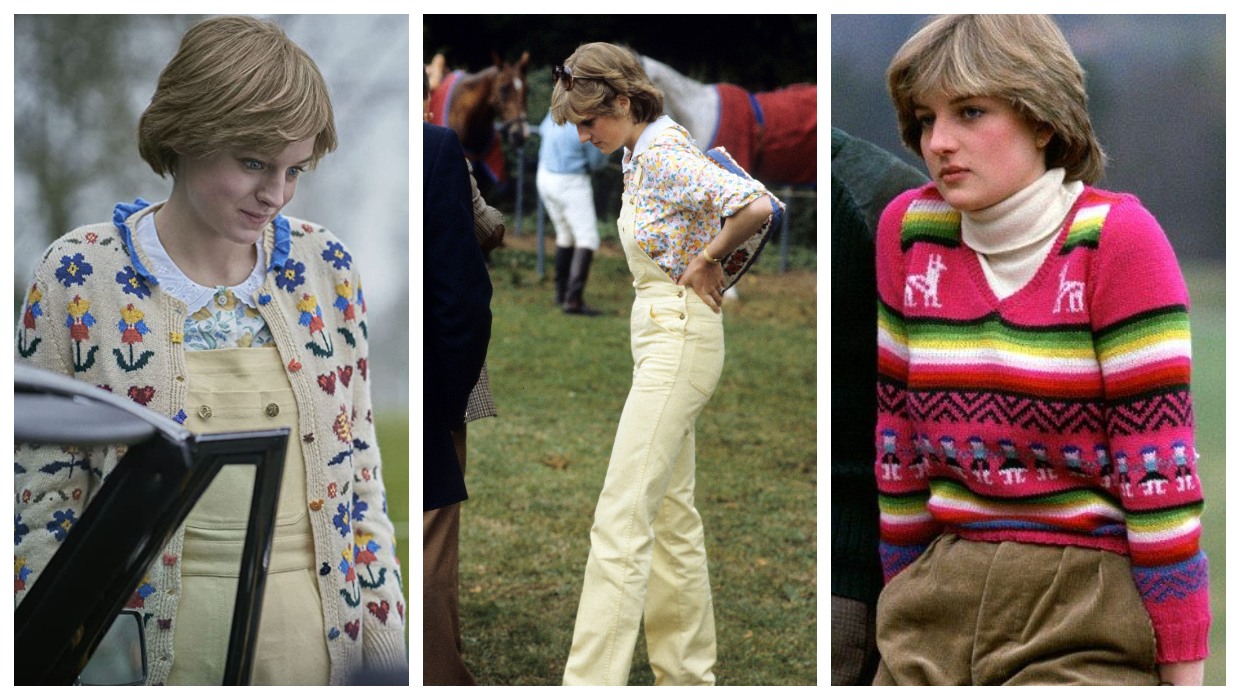 Diana wore a lot of quirky and bold prints. This outfit from The crown showed us a glimpse of that and these overalls she wore before. 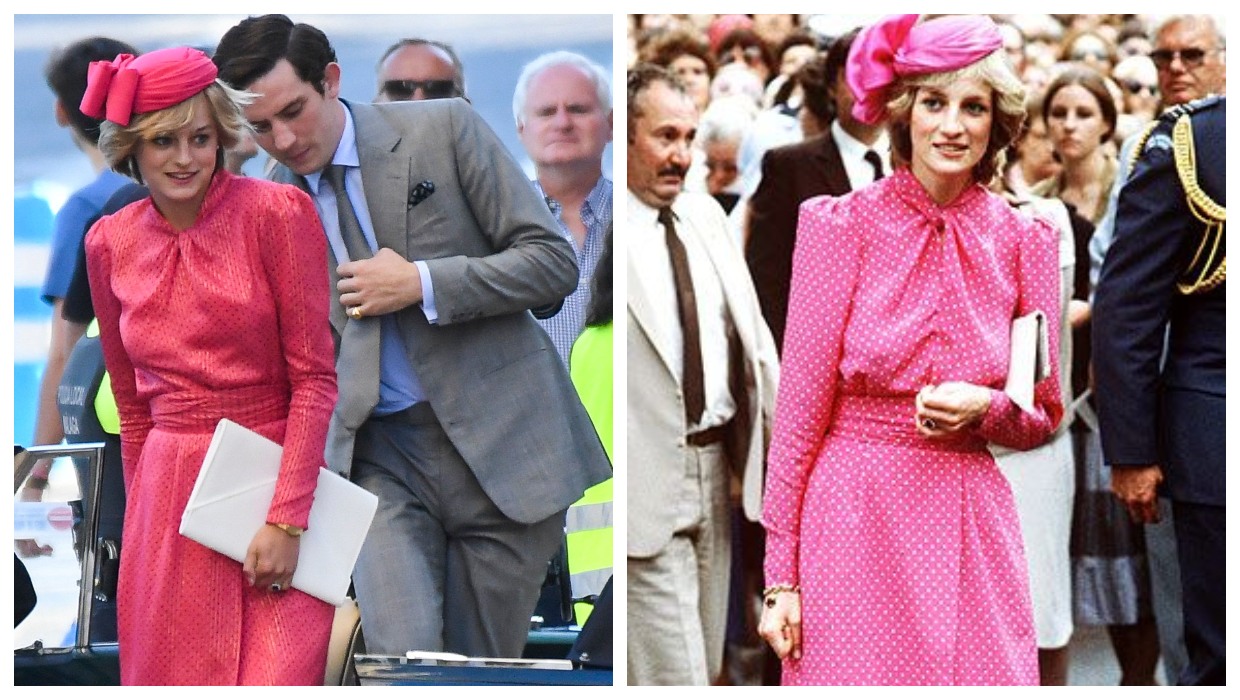 An almost identical look to the original. This bright pink dress was something to remember and  great reference to Diana's style in the 80s. 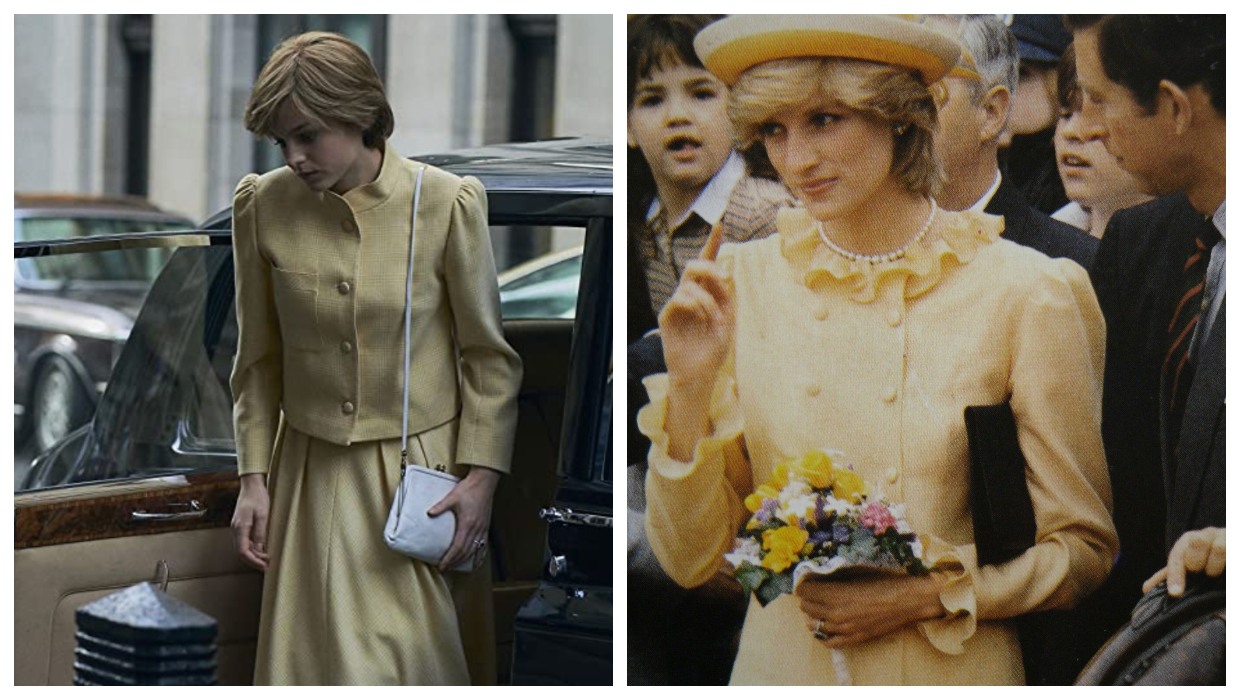 This color and other shades of yellow were worn more than once by Diana and this was probably a reference to that. She also was known for her amazing skirt suits which this outfit reminded us of as well. 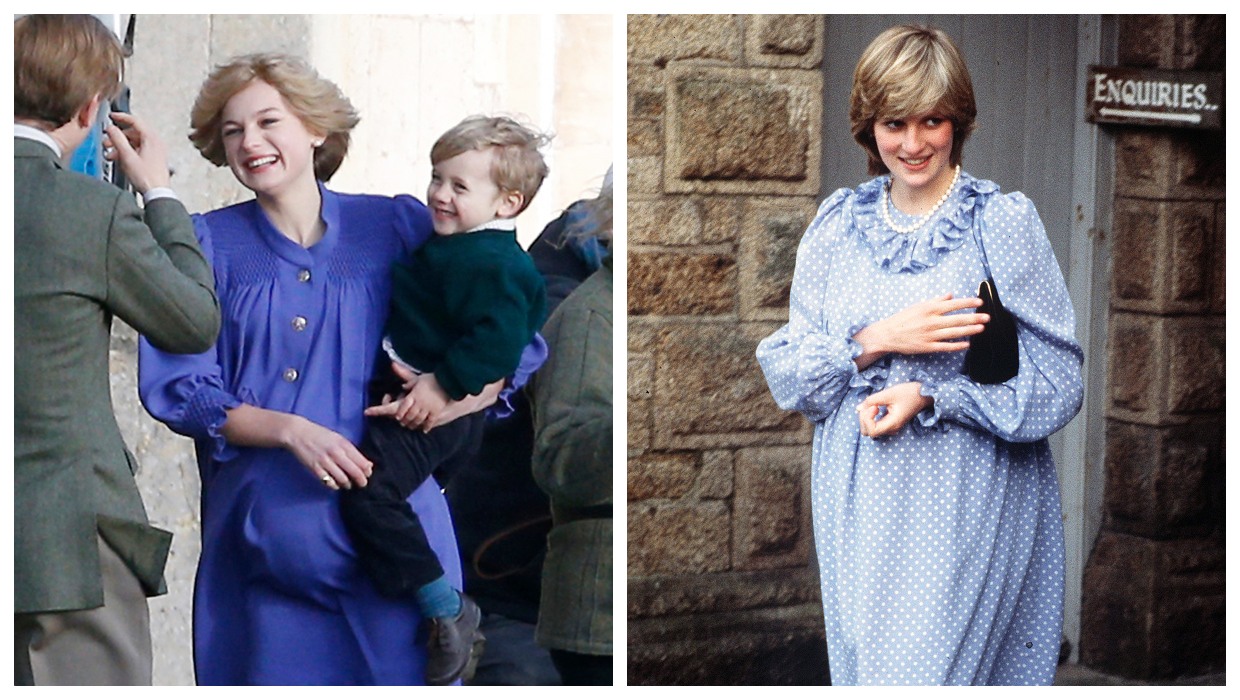 There was a glimpse of Diana pregnant in The Crown. We think it could have been an ode to some of her maternity looks, like this blue loose dress and scrunched sleeve. 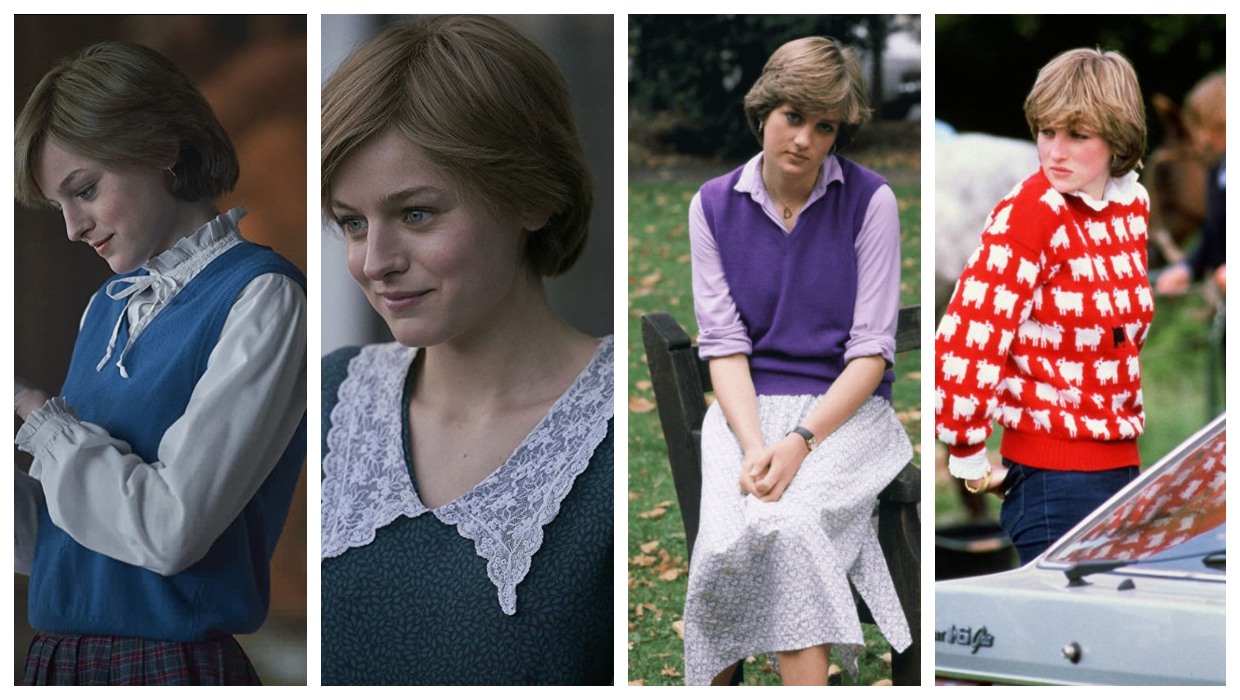 Diana was the queen of sweaters, she even transitioned her love for them on to the 90s with some of her most iconic street style looks, you must remember the biker shorts and Harvard sweater. Earlier, she wore sweater vests and some like the unforgettable red sheep sweater. We also noticed pronounced lace collars as a part of her wardrobe. 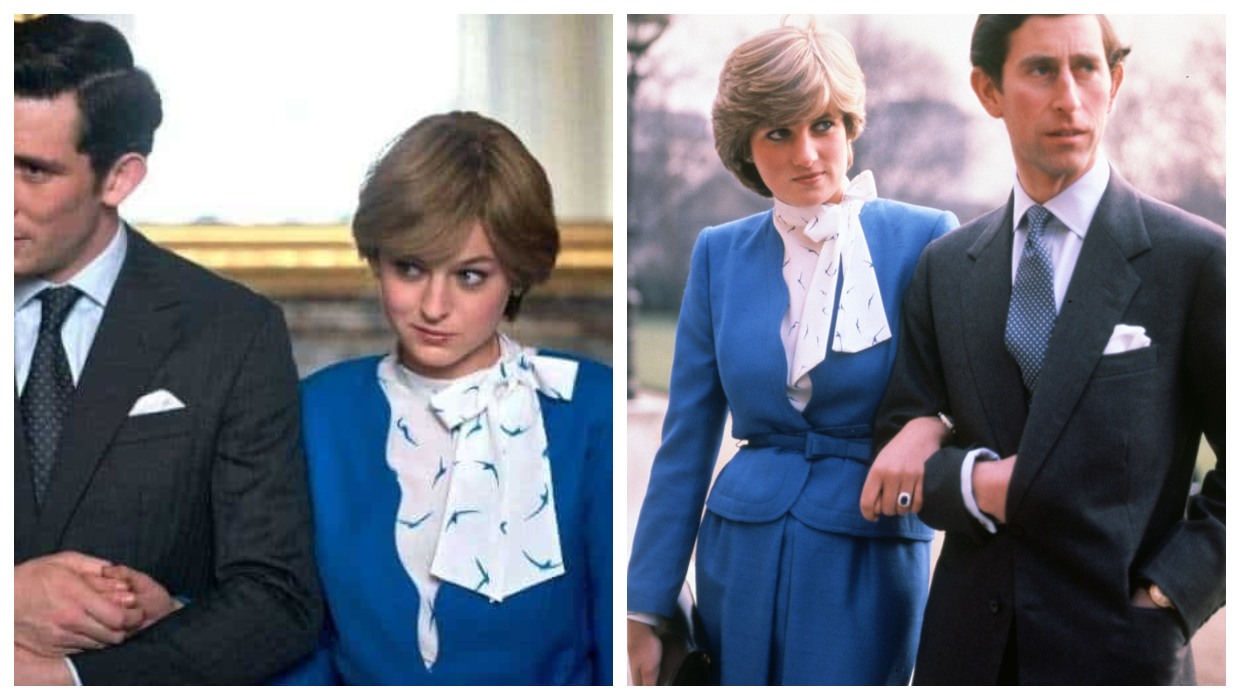 This blue suit was quite something and we're glad The Crown made almost a replica of it so we can appreciate it even more. This color was stunning on her and the bow detailing along with the scalloped blazer lining is definitely memorable. 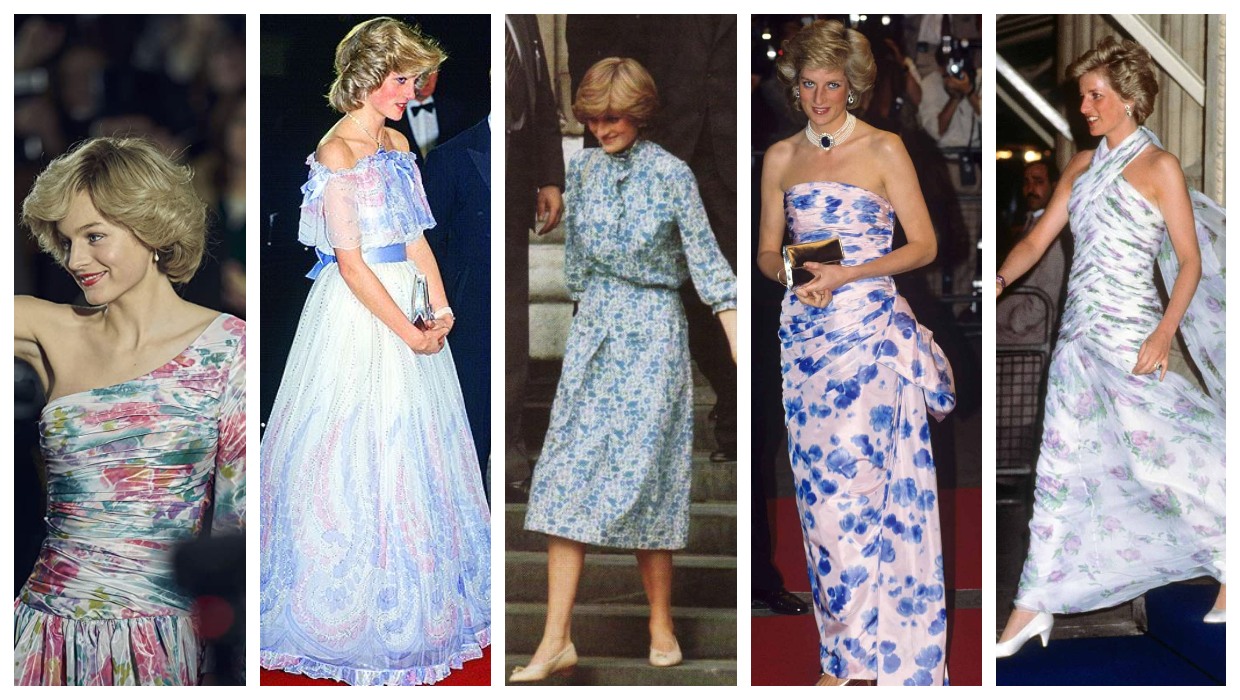 We couldn't find an exact replica of the dress she wore on The Crown, but it is evident looking at some of Diana's Dresses that florals were a big part of her wardrobe. The ethereal evening gown, she wore here in the picture in the middle, is one of her most unforgettable looks.