Over the years we've seen so many different interpretations of the legendary Cleopatra. Known for her beauty and charm, it was natural to see very interesting and gorgeous makeup and costume design. And so, we wanted to dissect all the Cleopatra movies and shows over the years, to see the different Cleopatra actresses' looks and what stood out about them. 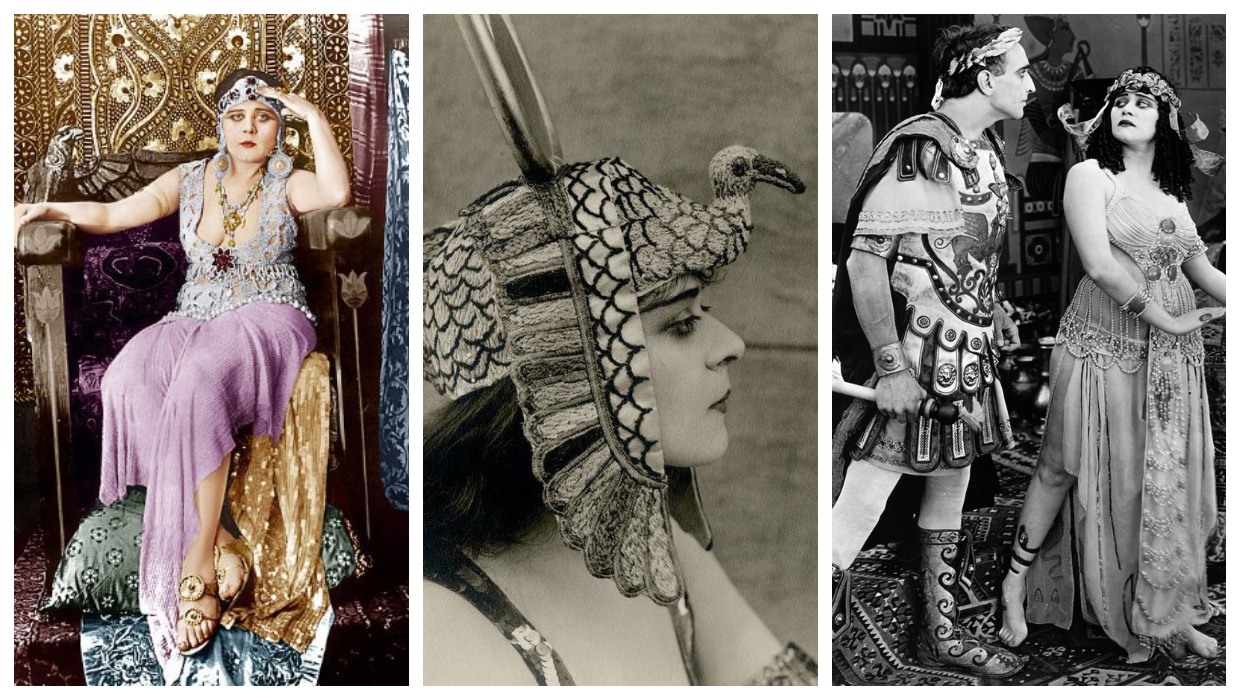 Despite it being a historical film, with every different decade you can see an influence in how that decade interpreted Cleopatra's looks and features. One of the earliest Cleopatra films was in 1917 played by Theda Bara. You can definitely see this decade's influence on the makeup, hair and styling, from the way the eyebrows and lips are drawn to the beading on her outfits. Her headpieces were also really a interesting merge between Pharaonic influence and accessory trends at the time. 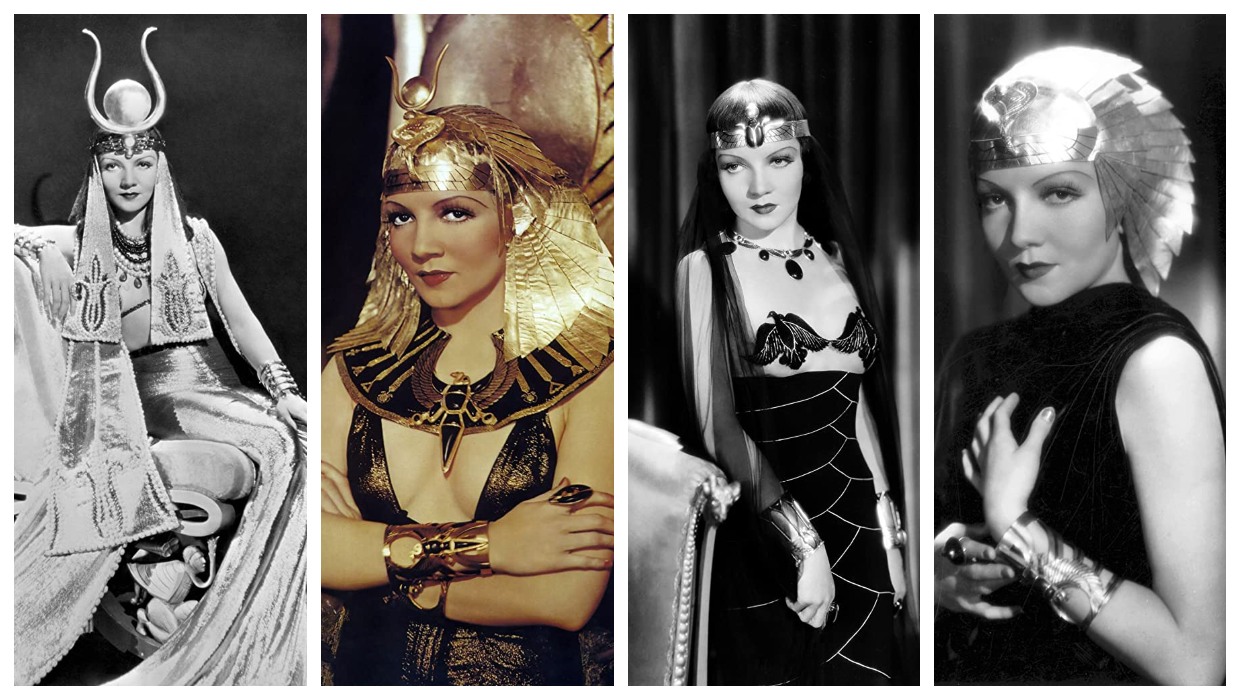 I think the styling in the film was genius, the costumes really were a work of art that felt thought out and ahead of it's time. Cleopatra here, was played by Claudette Colbert and this film was nominated for 5 Oscars and won 1. The Cleopatra presented here was more feminine through the wardrobe. Also the 1930s influence was apparent with her really thin rounded eyebrows and downturned eye makeup. Also, we think the statement accessories and headpieces were brilliant in the film. 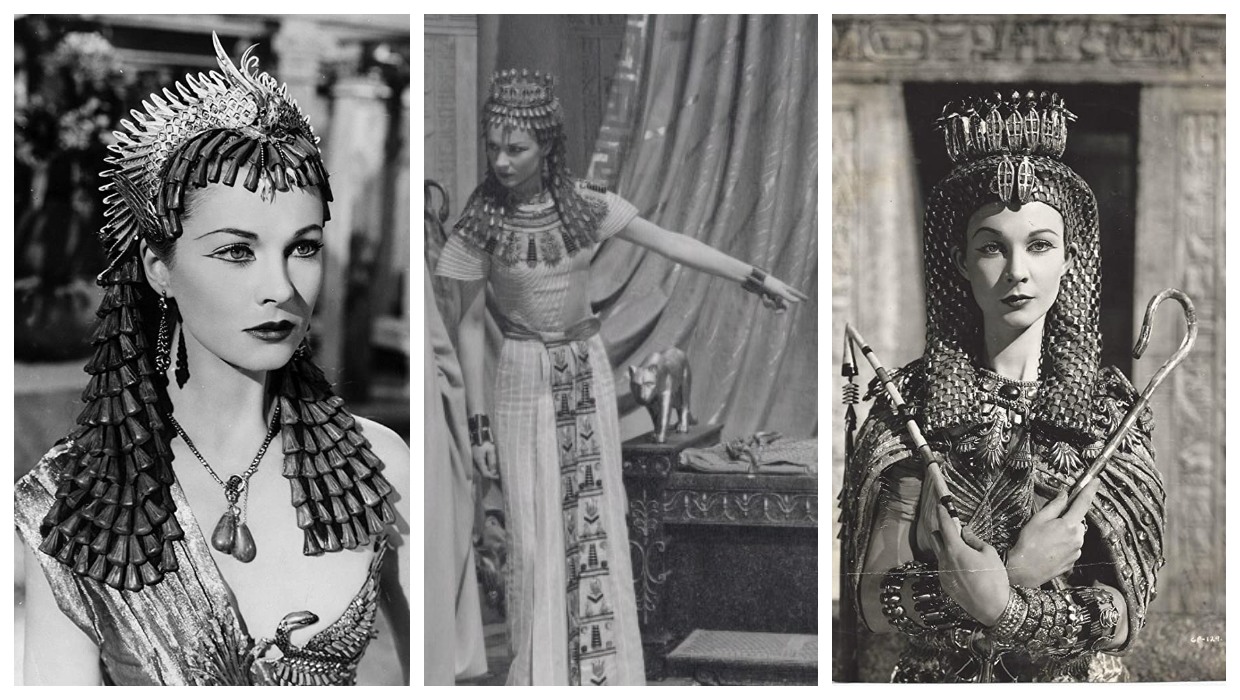 I think this is one of the more traditional Cleopatras with more historic references with the costume and very complex and sophisticated pieces. Her makeup features some influence from the traditional Cleopatra liner, but you can also almost instantly spot the 40's charm in her look. This Cleopatra was played by Vivien Leigh, whom you might know from Gone with The Wind. 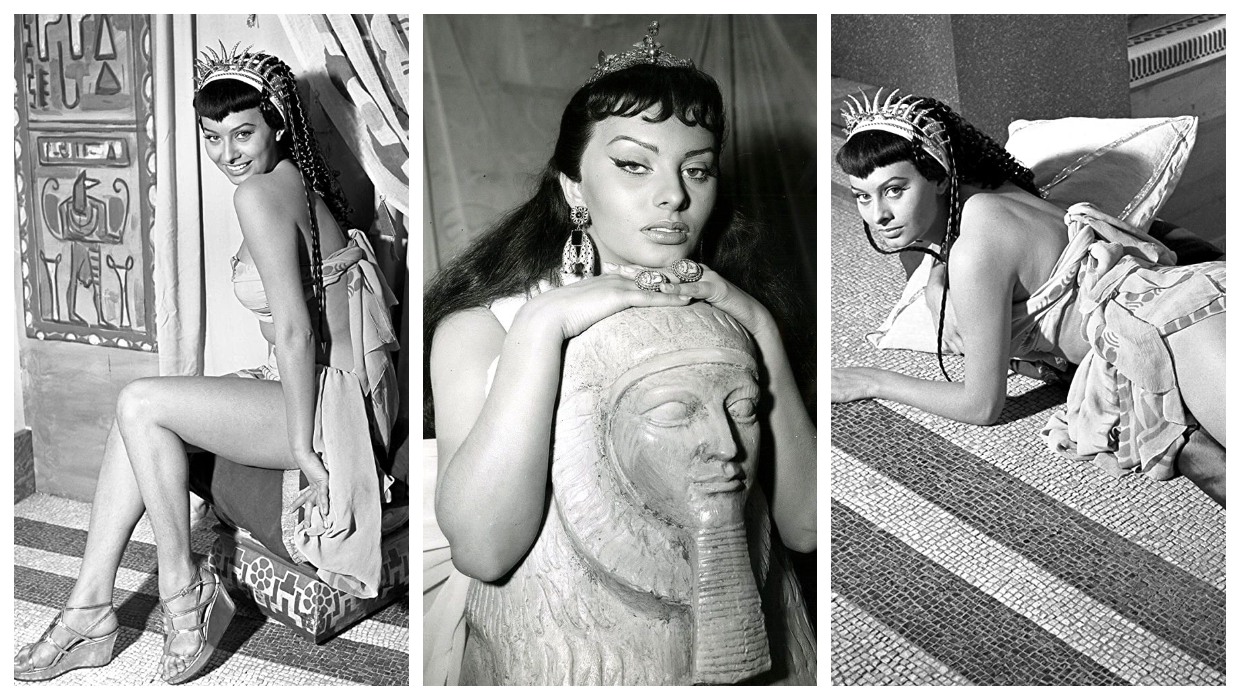 This is a more comedic and sexy take on Cleopatra by non other than Sophia Loren herself. The comedic take probably explains why the look wasn't really accurate. It was a more sexual and, maybe at the time, modern approach to Cleopatra. Her makeup and hair were also different, with mostly a simple fox liner eye look and raised defined brows. She had bangs and braids which were a reference to Cleo. 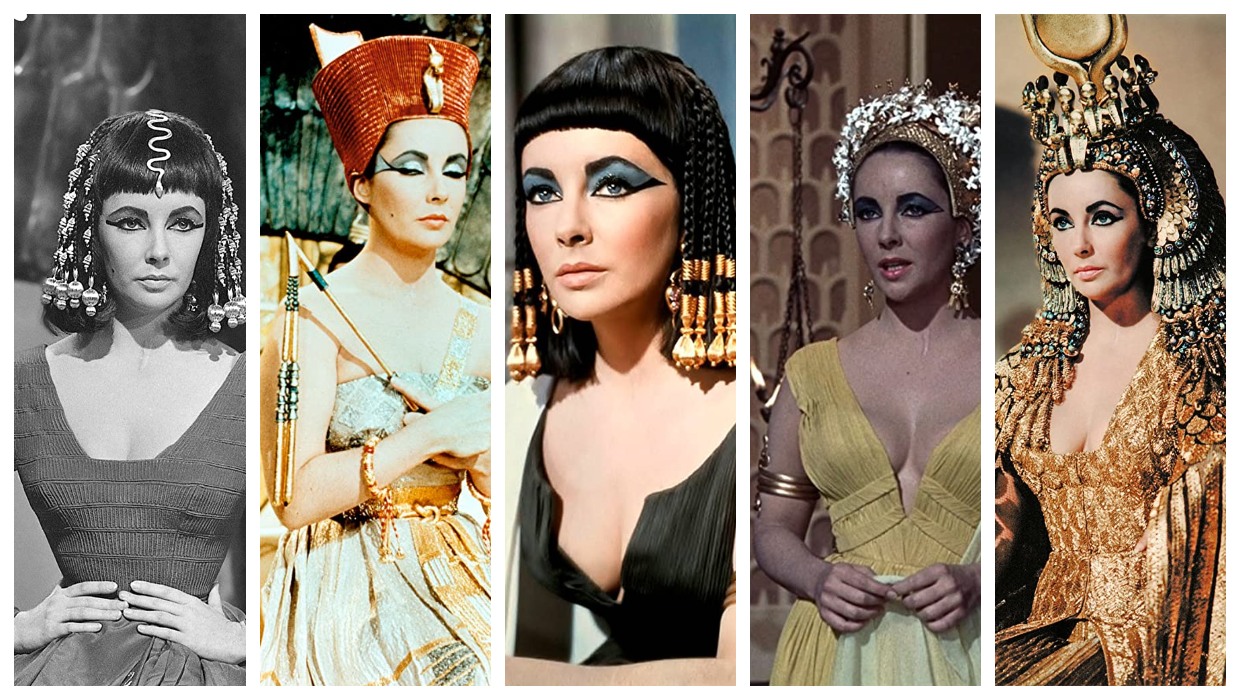 This is probably THE movie and THE Cleopatra that comes to mind when you think of her. The movie won 4 Oscars, Elizabeth Taylor was a vision and the costume design was brilliant. They were a bit experimental with some of the looks, but they mostly had the very important Cleopatra and pharaonic references. Her makeup in this film in iconic with the very graphic and Pharaonic liner and blue eyeshadow. The clothes were sexy and sophisticated with some decade sightings like the defined waistlines. 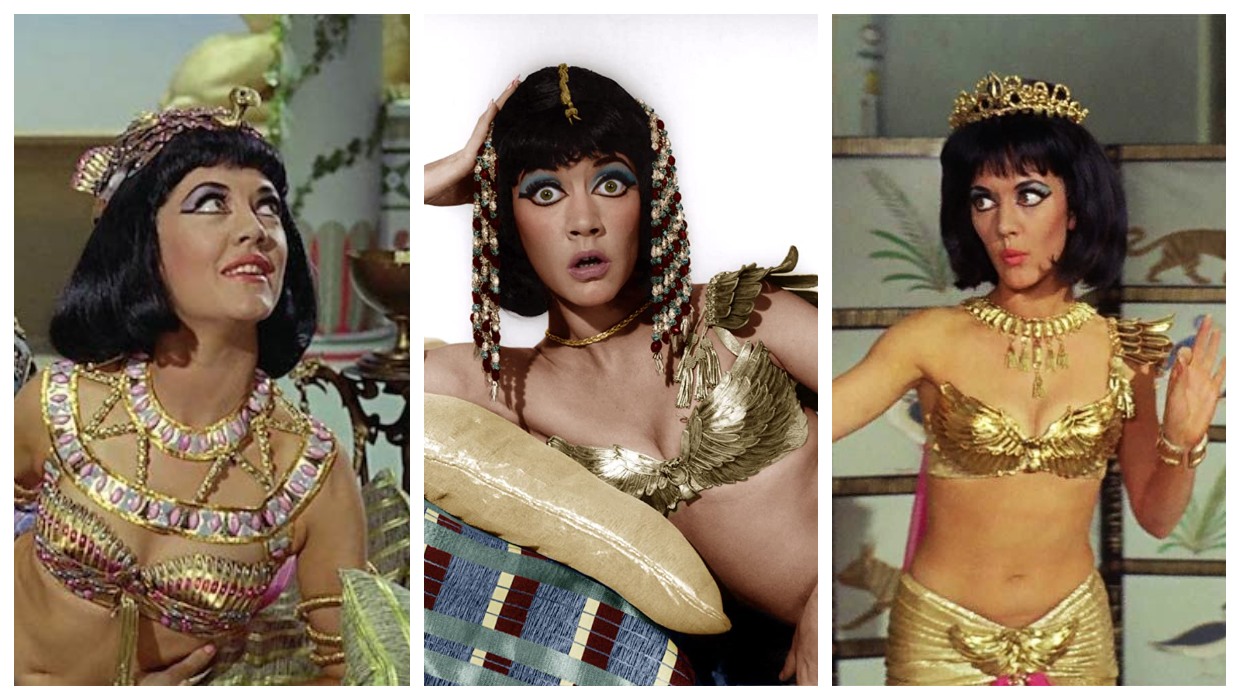 A British parody with Cleopatra played by Amanda Barrie. Her costume and makeup was pretty traditional but with a comedic take, of course, and mostly gold bikinis. The accessorizing was actually pretty impressive with really cool beaded headpieces. 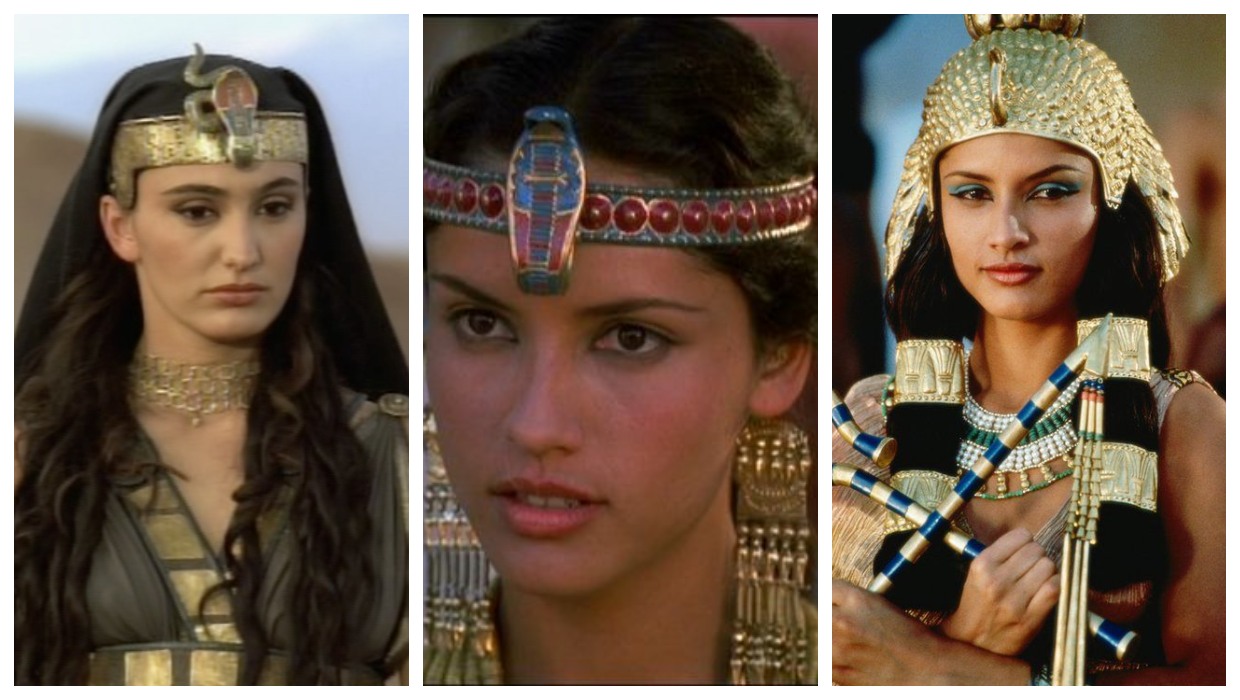 This is actually a TV mini-series and her look was pretty minimal, mostly depending on the headpieces and accessorizing. Leonor Varela's makeup wasn't traditional, it was very simple and actually pretty 90s at times. 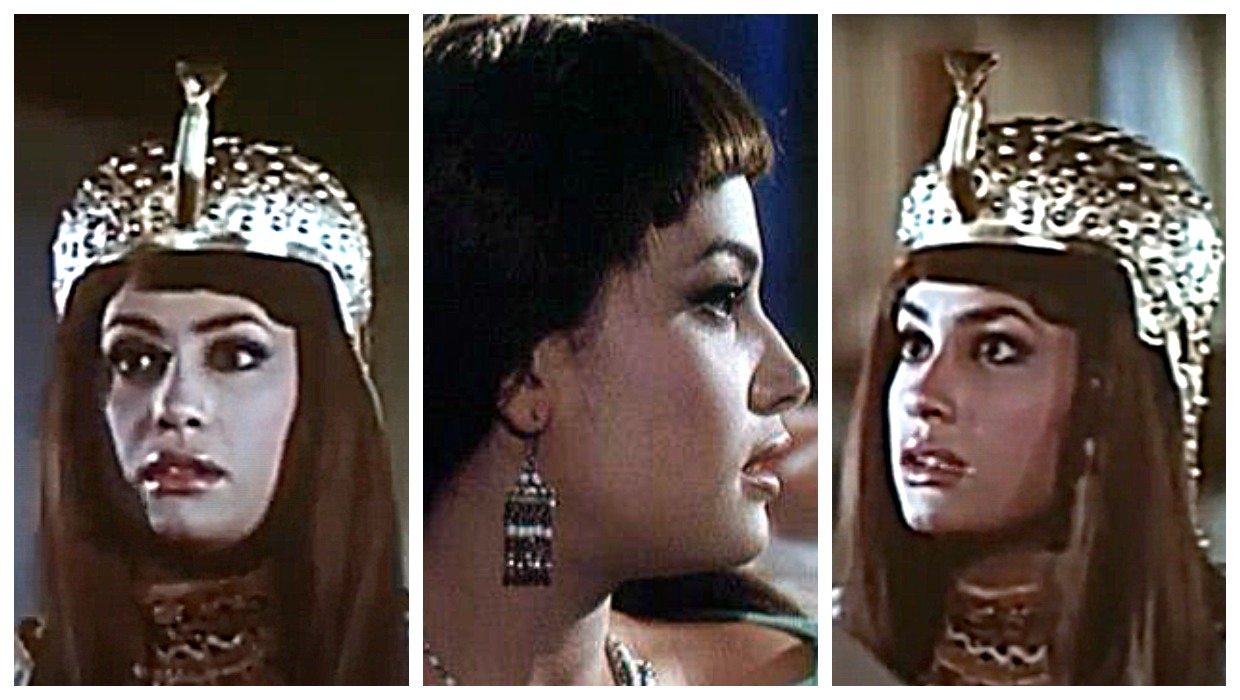 There aren't a lot of Cleopatra looks in this Hend Sabri film. She mostly daydreams about being Cleopatra and her looks were simple with the highlight being the statement gold pharaonic headpiece she wears in the first couple of scenes. 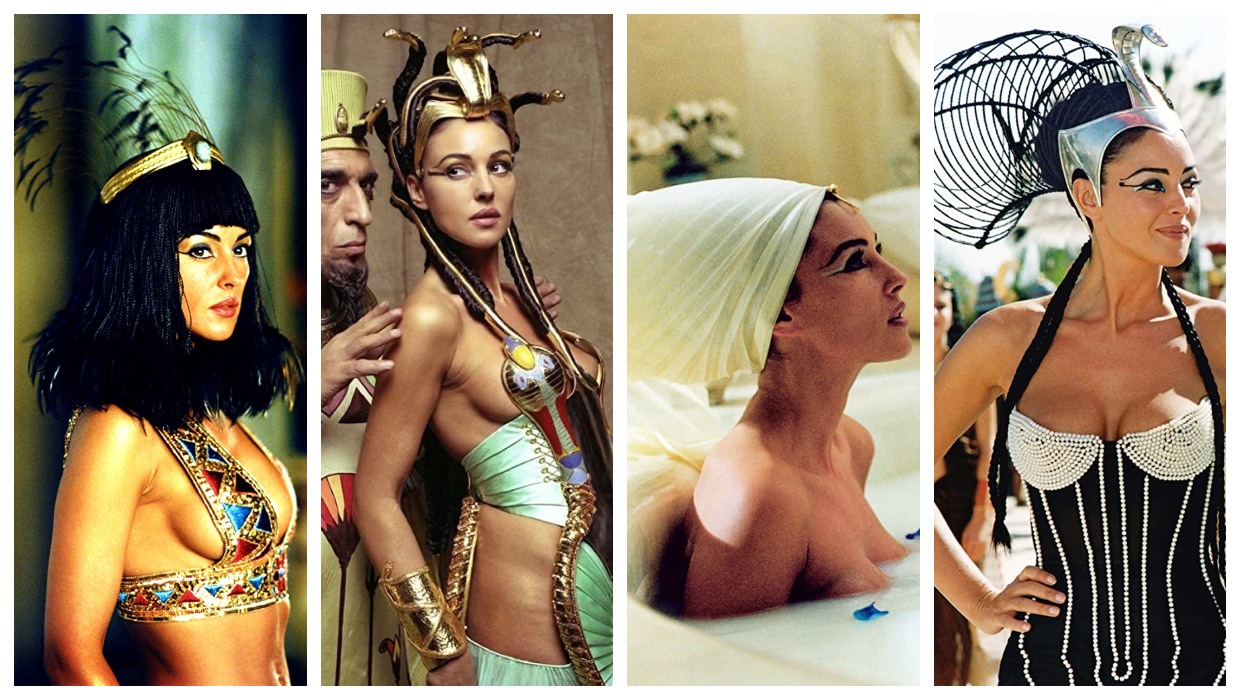 The famous comedic duo Asterix & Obelix go to egypt and we get to see Monica Bellucci as Cleopatra. This is another sexy Cleopatra with very seductive costumes. The wardrobe was actually really impressive with an Avant-garde take and a lot of cool statements and interpretations of pharaonic pieces and colors. Her makeup was also really cool with the graphic liners and play with contrasting colors. 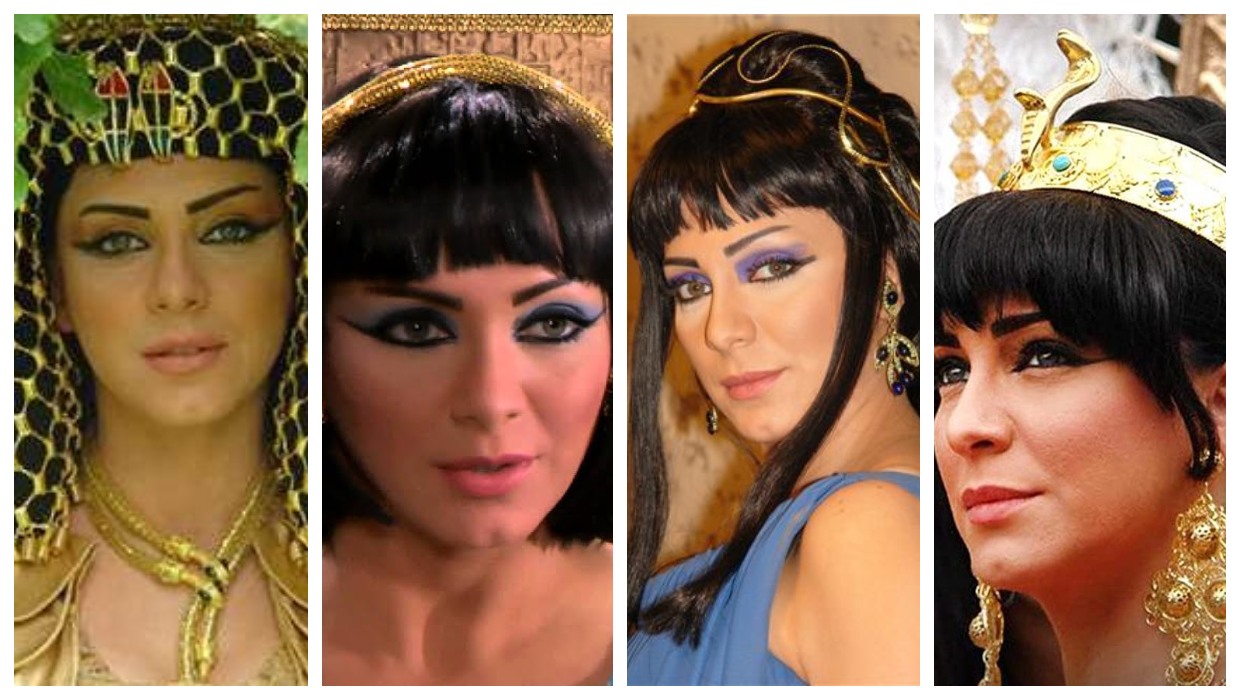 This was actually a Ramadan TV series and Cleopatra was played by Syrian actress Sulaf Fawakherji. Her Cleopatra look was more intense, dramatic and strong with a lot of color and graphic lines. Gold was also a main part of her look with accessories and big headpieces.

What Costume Should You Wear for Halloween? →

Sherihan: A 'Statement Earrings' Queen Before They Became Today's Trend →