We had to start with a shocker to show you just how far the industry has to go to make a change. In the past 5 years, female artists made up less than 13% of Arab artists that are signed by labels in the MENA region. Yes 13%. Spotify did some research and found that they are not getting the recognition and opportunities they deserve.

They also found that 60% of emerging female artists believe their potential is being limited by stereotypes and stigmas associated with being a women in the music industry. So, launching SAWTIK was a first step towards potentially making a big change.

They're taking 18 of the top playlists in the region and changing the covers with a design of SAWTIK and putting all Arab female artists on the covers as well as featuring them as a first song. They're launching the SAWTIK playlist so it can be a 'go to' place for listeners and labels to discover them. They also have billboards in Amman, Riyadh, Casablanca and Cairo. In addition to partnering with multiple artists, Latifa is the god mother mentor, but they also have other artists that believe in this initiative, like Mohammed Assaf, Carmen Soliman, Salma Rachid, Wegz and more...

We talked to Lynn Fattouh, Spotify's Consumer Marketing Manager for the Middle East and Africa (MEA), about their initiative...

"SAWTIK is a long term initiative and it is open to all female artists that have original content, are above 18, from the Arab world and are not signed to a label yet. So our doors are always welcoming all artists and we're just starting so there's much more to come and we're gonna help every single female artist we can in the Arab world."

She also mentioned that they want to see all artists getting the same opportunities in order to get the chance to grow and share their music. For Spotify, the idea was a no brainier and the supporting artists and the artist's mentor Latifa were more than happy to get on bored. "It was very welcomed, it felt like this is what everybody needs at this moment."

We also talked to super star Latifa, so stay tuned for our interview with her very soon. She will be working closely with SAWTIK's emerging female artists to mentor, endorse and nurture their work.

"Latifa is one of the biggest and most popular female artists in the Arab world. Her accomplishments are huge and she prevailed regardless of different obstacles and different challenges that she faced as an Arab woman in the music industry. Her success is a source of inspiration to all up and coming female artists and emerging artists. To add to that, Latifah had the same level of passion and sense of commitment towards supporting the next generation of female artists and this is why she was just perfect for us and we're so happy to have her on board," says Lynn.

Spotify initially picked 16 female artists for the initiative. Among them a familiar face, Shahd El Shaarawy. She talked to us about the challenges she's faced in the industry starting out because of how different her style in music is.... 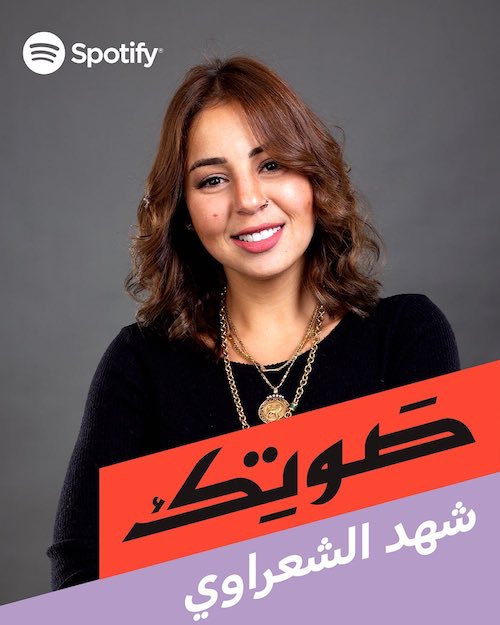 "The hip hop scene wasn't that big at the time in the Arab world, so since I was also singing in English and we were targeting the Middle East more, it was harder to give your voice and work reach, with this new music and new style for people. I'm trying to have my print in the industry and I started this year to release my solo music. In general there aren't a lot of female artists with enough spotlight or the attention they deserve. So hopefully things are going to change these days and we can promote our music more."

She also mentioned she's still trying to break some of the stereotypes and stigmas. She's just being herself and is hoping that people will like that and appreciate boldness and the artists who try to break the norm.

Shahd also expressed her excitement on working with Latifa, "Latifa's one the best female artists in the region. I'm super excited to work and to understand better from her the 'know how' of the choices, music and all that."

We also discussed with Lynn Spotify's platform and their responsibility when it comes to supporting emerging female artists."You never know, maybe today's artists that had just started become tomorrow's top superstars. And we want to contribute to the growth of all artists. So to answer your question at Spotify it is a responsibility for us and always will be."

"We have a workshop that is especially dedicated for emerging female artists to teach them how best to promote their music on Spotify and in the future as we go along, we will learn more and we will do more. Here's the opportunity for me to also mention that while we're launching this and taking our first step we also really hope other key players from the industry, artists and even listeners join us in supporting these emerging female artists and giving them new opportunities."

Fashion Business Course: How to Run Your Fashion Brand - Online →

How to Find Your Passion? A Small Guide to Help Clear Our Mind Clutter →

13 of the Best Female Empowerment Movies With Strong Inspiring Women →