Golden Globes 2021: The Best Moments From the Hilarious to the Emotional

For the first time ever, and hopefully the last, the Golden Globe Awards ceremony was virtual and held mainly online. The pandemic has changed everything and so when it came to the 2021 Golden Globes, things had to be moved around and changed. However, what hadn't changed are the funny moments, the empowering messages and touching wins. So, if you missed watching the Golden Globes 2021, or you watched but might have missed some details, here are the best  Golden Globes 2021 moments. Also don't forget to check out the celebrity looks and beauty trends right here!

Scroll down to the very bottom to see a video compilation of The best 2021 Golden Globes moments, if you missed the show!

The funniest moments from the Golden Globes 2021

Golden Globes 2021: All the Celebrity Looks of the Night!

1. A dinosaur behind Sandra Oh!

While Sandra Oh was presenting the Best Picture Award, there seemed to be something quite unusual in the background. It was then difficult to resume as is since the attention was shifted to the dinosaur on a sledge...

2. Catherine O'Hara's husband and his phone

Canadian actress Catherine O'Hara won the Best Actress in a Comedy TV series for her role in the series Schitt’s Creek. She received the news of her win on her couch at home, next to her husband.  Her husband seemed a little distracted during her speech as he was on his phone most of the time, he even at one point put on his reading glasses. However, he was actually doing the sweetest thing and looking for an audio of applause and cheering to play for her. She did, however, have to raise he voice over the sound of the clapping and the whole thing overall was definitely a highlight and hilarious.

We all know the struggle when we think everyone's hearing us on zoom and then realize they're not because of the damn internet. Even at the Golden Globes, the internet managed to still struggle. Just after the announcement of his win, Daniel Kaluuya started his speech, but no one could hear it. Thankfully it picked up again and he got to say his speech.

4. Pizza was the cause of Tracy Morgan's 'Soul' mix up

I cannot begin to express how much I admire how Tracy Morgan handled his mispronouncing of the name of Soul when presenting their award. He called the movie Sa, but then went on twitter to and wrote a hilarious tweet explaining what was going on in his mind at the time.

Fustany's Playlist: 19 of the Best Songs From Movie Soundtracks 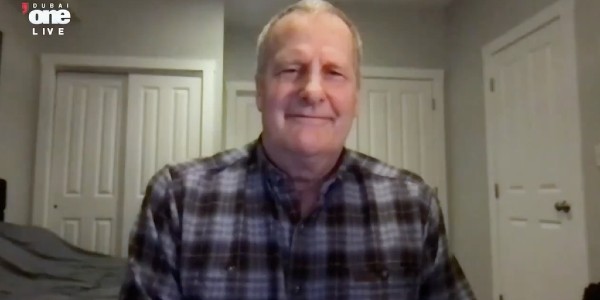 Well, it looks like the the real star of the show was not a person, but a room. In his background during the award show, the room had 4 doors. Yes 4. The internet had a lot to say about it and of course it quickly became a hilarious meme online.

Touching moments at the 2021 Golden Globes

After acclaimed television writer Norman Leyer received the Carol Burnett Award for Achievement in Television, he gave a short but moving speech. He thanked his wife, five daughters, son, grandchildren, and said, "At close to 99, I will tell you that I never lived alone, I've never laughed alone, that has as much to do with being here today as anything else I know."

People leave, but their names and achievements remain. This is exactly what happened when it was announced that the late Chadwick Bosman won the award for Best Actor. His wife Taylor Simone received on his behalf. In tears, her speech was moving powerful and incredbily memorable.

Powerful moments and strong messages at the 2021 Golden Globes

Jane Fonda made a strong and passionate call for diversity and inclusivity. After receiving the prestigious Cecil B. DeMille Award, she talked about how stories can really change people. She talked about how some voices are heard and elevated and others are wrongfully tuned out, and. how some are given opportunities and others are pushed away. She went on to say that we should all make an effort to include everyone, so that everyone has a chance and opportunity to rise, be seen and heard. us all, including all the groups that decide who gets hired, what gets hired. She concluded by reminding us that art has always led the way with history.

Mark Ruffalo took advantage of his  platform to deliver a powerful speech after receiving the Best Actor award in a Limited series. He highlighted his belief that with all the sadness and loss that we've all been through, what we have in common is our humanity. "What connects us is greater than what keeps us apart." He also emphasised that the more inclusive we are the faster we can heal.

Strong empowering moments for women at the 2021 Golden Globes

10 Ways to Control Your Urge for Shopping

11. Anya Taylor-Joy is the first Latina to win a Golden Globe

Once again, women make history, as Anya Taylor won the Best Actress award for The Queen's Gambit, making her the first Latin woman to win this award.

12. Emma Corrin wins the Golden Globe for The Crown

The young actress Emma Corin won the Golden Globe Award for her role as Princess Diana in The Crown, which we all watched and loved. This was her first nomination and she said it feels like a dream.

Golden Globes 2021: All the Celebrity Looks of the Night! →