How to Attract a Pisces Man

Let’s Find Out More About a Pisces Woman’s Personality:

Pisces women are gentle, romantic, compassionate, and have a spiritual side. She’s mystical, poetic and you need to be careful when it comes to handling her emotions as she’s quite sensitive. The Pisces woman is caring, mysterious, and has a very vivid imagination. She is always on the lookout for a deeper meaning in life.

The Pisces woman enjoys observing the feelings and actions of those around her. She knows what motivates her. She frequently expresses her inner passions and emotions through art.

Not Compatible with Pisces:

Best Characteristics of the Pisces:

Worst Traits of the Pisces:

Motto of the Pisces: 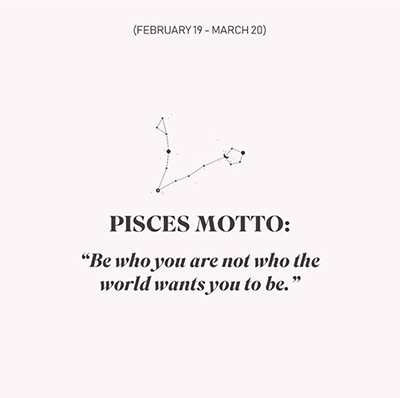 The Pisces woman is charming, soft, and feminine, but she’s not easy to fool. If you’re in a relationship with a Pisces woman, you better be straightforward because instead of her confronting you, she’ll simply disappear. You have to be gentle to her, and don’t tease her too often or she’ll feel like she’s being rejected.

The Pisces woman is very romantic and she will often lose herself in the relationship. She’s very feminine, which makes her very appealing to men. She’s relaxed and laid­-back, easy going and sensitive to the needs of others. Don’t take advantage of her giving nature!

How Each Zodiac Sign Acts When They Are in Love

Pisces women like to be surprised in bed, so surprise her with new lingerie or say, "Let's try something new in bed," and you'll win her heart. They value love as an essential component of their relationship, so expect a lot of foreplay because it is just as important to them as sex. Instead of plain or wild sex, they prefer something in the middle that will surprise and delight them. They are very sensual and tender, so be prepared for a lot of spooning.

Pisces as a Mother

A Pisces mother's personality is that she is completely liberated with her child and becomes an essential part of the child's life. She is extremely emotional and cannot bear the thought of her child in pain. She finds it difficult to punish or correct her child's mistakes when necessary, so her child frequently appears to be spoiled. When her child is in trouble, she does everything she can to help him. When the child reaches adulthood, the Pisces mother tends to rely on him.

9 Months of Waiting, a Lifetime of Accepting Your Beautiful Body After Becoming a Mother

The Pisces woman doesn’t do well as a leader as she lacks self-discipline. She’s very good when it comes to anything artistic, whether it’s writing, poetry, music, or even directing movies. The Pisces woman usually uses her creative skills and the ability to understand people to inspire others. She has tons of potential, but never attains the degree of fame she can possibly achieve, because she often doubts herself. If she was to limit that habit, she could become a great leader.

Which Job Suits Your Personality?

Handling money well is not really a strong suit for a Pisces woman, unless she plans really well. She is often impractical and can find herself making financial decisions based on emotion rather than logic. Pisces women should always be careful of those who try to defraud her or convince her to spend money on things that are in their interest and not in hers.

10 Ways to Control Your Urge for Shopping

The Pisces woman is one of the most loyal friends you’ll ever have. She’ll get involved in her friends’ problems in an attempt to solve them and often thinks of these problems as her own. The Pisces woman is attracted to people with severe problems and this is where she feels like she can add lots of value. She needs a strong and positive friend to lead the way and make her feel appreciated. The Pisces woman likes adventures and social events, she always has something exciting up her sleeves and needs someone to tag along and that is what she calls a long-lasting friendship.

10 Facts About Your Pisces Friends That Will Make You Appreciate Them!

The Pisces woman likes to feel comfortable in whatever she wears and usually goes for feminine clothes, such as silk and soft fabrics. She loves shimmer and would wear jewelry in unexpected places such as anklets and brooches. The Pisces woman is flexible when it comes to fashion and doesn’t necessarily follow trends. She can get away with pretty much anything, even at times when she goes for dramatic outfits. The Pisces woman loves primary colors and styles that suit her personality.

What gifts to buy for Pisces?

Pisces women love super romantic gifts, like a bouquet along with a handwritten poem. A Pisces woman loves anything beautiful and can really appreciate it. Anything that expresses your love and care for her will mean the world to her. Just show her that you support and love her.

The Best Gift Ideas Based on Your Zodiac Sign

Things To Avoid Doing With a Pisces Woman

You can tell a lot about a person from their star sign! Click here to know more about the Horoscopes

10 Facts About Your Pisces Friends That Will Make You Appreciate Them! →

Everything You Need To Know About Hydration Face Masks →